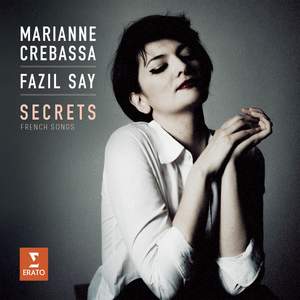 How can one resist the combination of Marianne Crebassa’s attractive voice and a selection of French song, especially Debussy’s Chansons de Bilitis and three Veraline songs? As for Ravel’s Shéhérazade,... — BBC Music Magazine, January 2018, 4 out of 5 stars More…

Mezzo-soprano Marianne Crebassa and pianist Fazıl Say share some tantalising, captivating and sensuous Secrets in this album of songs, centred on Debussy’s Trois Chansons de Bilitis, Ravel’s Shéhérazade and Fazıl Say’s own Gezi Park 3 – which he and Crebassa premiered in 2014. Describing the recording sessions, Marianne Crebassa says: “Sometimes we worked in a kind of trance … there were some moments when nothing seemed to exist around us …”

Secrets includes Debussy’s discreetly erotic Trois Chansons de Bilitis, settings of texts by Pierre Louÿs that were inspired by ancient Greek literature, and Ravel’s sumptuous Shéhérazade, three contrasting songs that conjure up exotic moods rather than retelling the stories of the 1001 Nights. They are joined by a work by Fazıl Say that is inspired by his native Turkey, but which moves away from the spirit of legend and fantasy: Gezi Park 3 belongs to a series of works that he composed in response to the momentous civil protests that took place in in Istanbul in June 2013. Say and Crebassa gave its premiere in Bremen in September 2014, where it was heard as a ‘Ballad for mezzo-soprano, piano and orchestra’. Crebassa’s part is a wordless vocalise and the work is recorded here in a version for voice and piano.

How can one resist the combination of Marianne Crebassa’s attractive voice and a selection of French song, especially Debussy’s Chansons de Bilitis and three Veraline songs? As for Ravel’s Shéhérazade, she floats to effortlessly, so evocatively that it seems possible to smell and touch this faux-Asia.

With her warm tone and often remarkable way with both vocal colour and verbal inflection, Crebassa is outstanding in this repertory, and in Fazıl Say she has an accompanist whose direct yet subtle approach matches her own.'the combination of intelligence, immediacy and subtlety is utterly compelling and marks ‘Secrets’ out as one of the finest French song recitals of recent years. I cannot recommend it too highly.

This collection of French songs celebrates a rare artistry, in which marriage of word and tone are paramount and prove hugely rewarding... In the Bilitis songs and Shéhérazade, her confiding style evokes atmospheres of nuanced suggestiveness...her diction is good and the voice itself is consistently lovely, with dark low notes...A memorable disc.

Crebassa lavishes just as much care on Say’s vocalise-like lines as she does on the songs in her native language. Every one is compelling; from the opening moments when she wraps such velvety tone around Debussy’s Chansons de Bilitis, her range of tone and nuance is exquisite.

her voice is meltingly gorgeous...almost immediately, in Debussy’s Chansons de Bilitis, which opens the album, we feel as if we’re inside her head. These songs can be delivered coyly, but Crebassa gives them a far more decadent edge. You surrender very quickly.