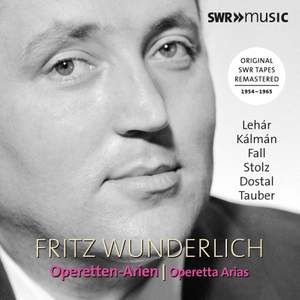 Wunderlich brings his burnished tone and immaculate legato to operetta from the Silver Age as well as opera. — BBC Music Magazine, February 2018,

One of Fritz Wunderlich’s (1930–1966) most fascinating qualities was his incredible range of musical skills. He was probably Germany’s greatest tenor who could perform virtually anything in the repertoire for high male voice – from Schlager music to arias from J. S. Bach's Passions; from Mozart to music of the 20th century; from the greatest tenor hits of all times to unknown gems. His musicality and his seriousness as an artist turned everything he sang into something extraordinary.

The same can be said for his performances of operettas, lighter versions of grander opera. Operetta certainly enjoyed a heyday, and even today it still has its fans. Operettas have a high standard as far as the quality of entertainment is concerned, enjoying a higher standard than some opera seria of the Baroque period that were generally composed in a formulaic manner.

Operetta had its “Golden Age” in the second half of the 19th century, in Paris, where the Franco-German composer Jacques Offenbach (1819–1880) established “modern” operetta and took it to extremes in quite an intellectually stimulating and witty manner. Johann Strauss II (1825–1899) naturally became the king of operetta in Vienna.

This double-CD features recordings produced in the studio Kaiserslautern prior to November 1965. Although in the early days of his career Wunderlich's vocal skills had not yet been fully developed, his unique qualities are heard here at their best – the distinctive voice with the silver core and the golden gleam.

Wunderlich brings his burnished tone and immaculate legato to operetta from the Silver Age as well as opera.