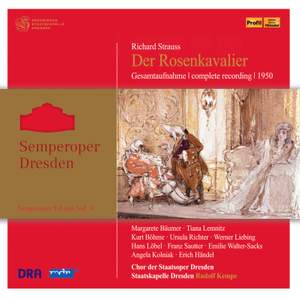 the recording teems with lovely little details from a fine extended cast of seasoned pros.. A Rosenkavalier that, though certainly rough around the edges in terms of vocalism, gets the drama... — Opera, February 2018 More…

The combination of Der Rosenkavalier and Dresden has always been very special. The work was premiered at the Semperoper in 1911 – and was an immediate sensation. The dress rehearsal alone received more comprehensive press coverage than the Kaiser's birthday on the same day, with reporters racing to wire the wonderful success to their papers. The Deutsche Reichsbahn scheduled special trains to bring ardent music lovers from other places to the city on the Elbe. There was perhaps a feeling that it would be the last European operatic event before the First World War broke out ... Not least the work itself contributed to the nostalgic fin-de-siècle atmosphere. Strauss and his librettist Hugo von Hofmannsthal had written a "comedy for music" in which the Rococo era of Maria Theresia's Vienna was revived – not for historical reasons, but as a reflection on their own apocalyptic mood. Everything seems so genuine in this piece and yet it is all an illusion. From the solemn presentation of the rose (a Hofmannsthal invention) to the Viennese waltz mania, it is a musical anachronism – which makes its timelessness all too clear. The work was premiered in January 1911, not in Vienna, but in opera-loving Dresden, where Strauss's "personal conductor" general music director Ernst von Schuch conducted the Dresden LISH Hofkapelle (today's Staatskapelle), which Strauss deemed to be "the best opera orchestra in the world". The Staatskapelle musicians still play their idol's work from the original orchestral parts of the premiere.

the recording teems with lovely little details from a fine extended cast of seasoned pros.. A Rosenkavalier that, though certainly rough around the edges in terms of vocalism, gets the drama - and the comedy - across as directly as any on disc.