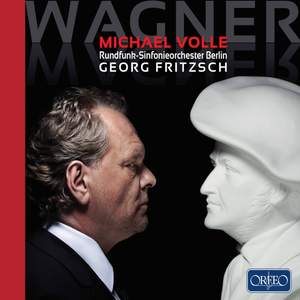 With Michael Volle in such outstanding form this essential Wagner collection is a riveting experience on Orfeo. — MusicWeb International, September 2017 More…

The roles featured on this CD are, in more ways than one, truly great ones; the vocal and interpretational demands on the artist are of an equally high calibre. The fact, as J. M. Fischer writes in the booklet text, that the term 'heroic baritone' has established itself in connection with these roles is recognition of the highly technical challenges – and simultaneously an understatement. The parallels with Wagnerʼs 'heroic tenor roles' can be seen in the truly supreme vocal challenges, and yet the bass-baritone protagonistʼs role in each of these works also demands even greater control of the dramatic character and, therefore, a more complex musical approach. The enduring fascination of these demanding roles can also be sought in their 'tragic awareness'.

Michael Volle is the epitome of a singer who has almost untypically by todayʼs standard continuously grown into these roles, bringing out each one's individual characteristics. Hailing from a much wider repertoire, he now performs those great Wagner roles on the most renowned international stages – most recently as Sachs at the New York Met as well as in the highly acclaimed Herheim production in Salzburg or the new version in Bayreuth. Following on from parts like Wolfram, Amfortas and Sachs, the artist is now able to tackle Wotan, Wanderer and – perhaps the most challenging Wagnerian baritone role of all – the Dutchman from the composerʼs early period.

Michael Volle receives ample support from Georg Fritzsch, a GMD with many years of opera to his credit, and conducting the highly flexible Radio Symphony Orchestra of Berlin, whose Wagner credentials are documented on a recent CD of all his operas.

With Michael Volle in such outstanding form this essential Wagner collection is a riveting experience on Orfeo.

The conductor Georg Fritzsch and the Berlin Radio Symphony are able collaborators, and the recorded sounds favours the voice.