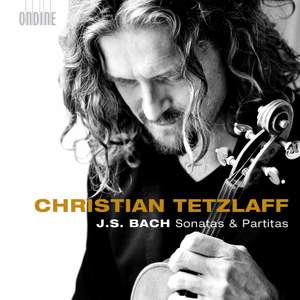 Tetzlaff spans the gamut of technique and expression…Lines are lucidly shaped and cadenced, and the implied counterpoint is so articulately voiced as to create dialogues and conversations, flitting... — BBC Music Magazine, December 2017, 5 out of 5 stars More…

Bach’s Sonatas and Partitas have an iconic status in the violin repertoire. Yet, little is known about the background of these fascinating works. Bach’s autograph manuscript is dated in Köthen in 1720, and it is commonly considered as the year when the cycle was completed. In his booklet notes Christian Tetzlaff offers fascinating perspectives of these masterpieces.

Christian Tetzlaff is considered one of the world’s leading international violinists and maintains an extensive performing schedule. Musical America named him ‘Instrumentalist of the Year’ in 2005 and his recording of the violin concertos by Mendelssohn and Schumann, released on Ondine in 2011 (ODE11952), received the ‘Preis der deutschen Schallplattenkritik’. Gramophone selected the recording of the Schumann Violin Sonatas with Lars Vogt (ODE12052) as ‘Disc of the Month’ in January 2014. In addition, in 2015 ICMA nominated Christian Tetzlaff as ‘Artist of the Year’. His recordings on Ondine with Brahms’ Trios (ODE12712D) and Violin Concertos by Dvorák and Suk (1279-5) released in 2015 and 2016 earned GRAMMY nominations

Tetzlaff spans the gamut of technique and expression…Lines are lucidly shaped and cadenced, and the implied counterpoint is so articulately voiced as to create dialogues and conversations, flitting from witty repartee too gritty debate. His tonal palette is richly chromatic, and when the violin sound turns from the earthly to the ethereal, the effect is almost that of a philosophical discourse between body and soul.

Tetzlaff has plenty to tell us about Bach’s unaccompanied violin music. Sample almost anywhere in this beautifully played set and you sense a seasoned musical mind with a will of its own…This is truly individual playing.

Tetzlaff is one of the most compelling exponents of these classics to date: aware of period practice and technique, yet conscious of the “Romantic” performance tradition of the sonatas and partitas....[he] plays with a pristine freshness of dynamics and phrasing that takes the breath away, above all in the three fugues of the sonatas.

His sleeve note explaining his approach to the cycle is as thoughtful and personal as you would expect from him, and his realisation of it in performance does indeed hang together as a journey from solemnity towards acceptance and joy, with the lengthy Chaconne of the D minor Sonata perhaps representing a very personal bereavement.