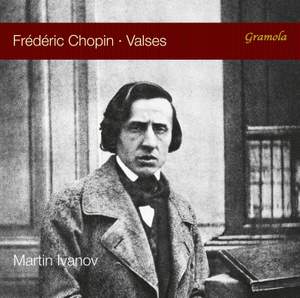 Frederic Chopin counts among Johann Strauss Sr. and Joseph Lanner as one of the significant cofounders of the modern form of the waltz during the first half of the 19th century. In contrast to the orchestral variants, the contributions by Chopin – composed like most of his works for his own instrument, the piano – are suited rather for the concert than the dancing hall. With his debut album the young Bulgarian pianist Martin Ivanov, who already at an early age was critically acclaimed in numerous international competitions, presents the waltzes by Chopin. Although most of the waltzes are written in different major keys and therefore tend to convey a cheerful, bright and entertaining impression, a few are set in minor keys which allow a glimpse of that certain melancholy that is characteristic of Chopin’s oeuvre as a whole. Martin Ivnov was born in 1990 in Plovdiv, Bulgaria into a family of musicians and started to study piano at the age of just four. In the period between 2001 and 2009 he took part in 50 piano competitions in Bulgaria and abroad, always with great success, in particular at the following competitions: Young Virtuosos 2004, International Competition for Young Pianists Ettlingen 2004, Franz Schubert 2005, and LISMA Competition 2013.