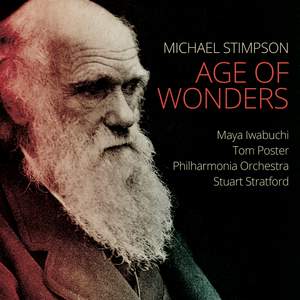 Stimpson: The Man Who Walked with Henslow

Stimpson: String Quartet No. 2 (The Beagle)

String Quartet No. 2 (The Beagle): I. Outbound

An Entangled Bank: I. Down House

Readings & Interviews: Voyage of the Beagle

Readings & Interviews: The Rush to Publication

Age of Wonders, a voyage in music by Michael Stimpson, was composed to mark the 200th anniversary of the birth of Charles Darwin. Now masterfully recorded by the Philharmonia Orchestra, the full evolution from violin and piano, through string quartet, string orchestra, and to complete as a work for full orchestra can be heard in its entirety under the baton of conductor Stuart Stratford. Violinist Maya Iwabuchi and pianist Tom Poster bring to life Darwin’s early life in The Man Who Walked with Henslow, while Maya, Fiona Cornall, Nicholas Bootiman, and Karen Stephenson of the Philharmonia expertly perform the string quartet (The Beagle). The ‘Englishness' of Darwin’s home, Down House, is expressed in the work for string orchestra, An Entangled Bank, named after the famous quotation by Charles Darwin. Transmutations, for full orchestra, finally brings together the evolving threads, motifs, patterns, and mutations into four variations, closing Age of Wonders with a reflection of the opening work, Henslow. The music is added to on the second CD with the inspirational readings of Darwin by the late Robert Tear, Ruth Padel reading some of her poems also written for the Darwin anniversary, other interviews, and recordings of Darwin’s finches used in the music.