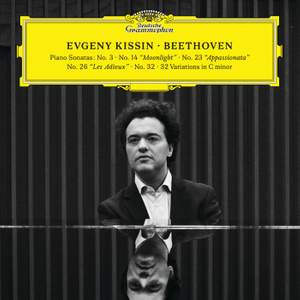 All but one of these performances are exceptional, even by Kissin’s stratospheric standards, the odd one out being the Moonlight Sonata…But the most extraordinary track is that of the 32 Variations.... — BBC Music Magazine, Christmas 2017, More…

James is mightily impressed by a selection of Beethoven's piano music from Evgeny Kissin, including the Moonlight and Les Adieux sonatas.

Evgeny Kissin skyrocketed to international fame as a piano sensation in the 1980s.

He entranced international audiences with captivating interpretations of Romantic masterworks during his teens, and has since flourished as one of the world’s most charismatic and visionary performers. Today he is a living legend, one of the most iconic names and magnetic personalities in all of music..

Selected by the artist himself, this luxurious Beethoven double album represents Kissin's personal journey with the composer's solo work over the last decade and includes some of Beethoven's greatest and best-loved solo piano works such as the "Moonlight" Sonata or the "Appassionata" - most of them never released before.

This album is a first in a series of releases renewing the relationship between Kissin and Deutsche Grammophon.

All but one of these performances are exceptional, even by Kissin’s stratospheric standards, the odd one out being the Moonlight Sonata…But the most extraordinary track is that of the 32 Variations. With some lasting just 11 seconds, and the kaleidoscope shaken vigorously each time, this work is a perennial teaser. Kissin’s solution is to tear through it at breakneck speed, yet somehow he manages to let each variation flower brilliantly in its own way.

What I think makes his playing remarkable is a combination of absolute clarity and precision in the faster passagework with an astonishing ability to vary his tone from the stormiest, heaviest onslaught to the most tender of sounds within an instant...I understand that Kissin personally selected which recordings should be included, and in every single case it's abundantly clear exactly why each one made the final cut on this outstanding collection.