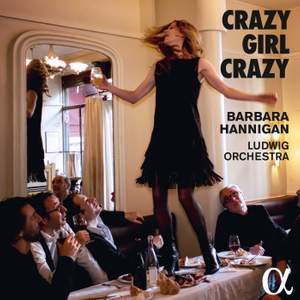 Crazy Girl Crazy is an album that – just like its muse and protagonist – flouts the rules…The litheness of Hannigan’s voice beguiles, so that the near-segue into the Lulu Suite (1934) comes as... — BBC Music Magazine, December 2017, 5 out of 5 stars More…

Katherine talks to the Canadian soprano about her bold new album juxtaposing Gershwin, Berg and Berio, in which she both sings and directs the Ludwig Orchestra.

Whether singing, conducting, dancing or acting, the Canadian soprano Barbara Hannigan is a constant source of fascination. Alpha Classics is proud to enter her world and her very first album as singer and conductor in 2017: with the Amsterdam based orchestra Ensemble Ludwig, of which she is associate artist.

Barbara Hannigan has devised a programme including Berg's Lulu Suite and Gershwin's Girl Crazy in a Suite newly arranged by the multi award- winning American composer Bill Elliott. To complement these two pieces, she has recorded Berio's spectacular Sequenza III for solo voice.

An outstanding soprano, a distinguished interpreter of the music of the twentieth and twenty-first centuries, an all-round artist who creates a sensation on concert platforms and in opera houses throughout the world, Barbara Hannigan has enriched her palette over the past few years by devoting a portion of her activities to conducting. This album in the form of a musical portrait of the artist, is completed by a DVD of a film made by Mathieu Amalric during the rehearsals and recording sessions. It plunges into the heart of the orchestra with a very personal look at the exchanges between conductor and musicians.

Over the next few years, Alpha will accompany Barbara Hannigan in a number of projects from very varied horizons.

Crazy Girl Crazy is an album that – just like its muse and protagonist – flouts the rules…The litheness of Hannigan’s voice beguiles, so that the near-segue into the Lulu Suite (1934) comes as a sense-sharpening emotional jolt…It’s a highly personal, sensual reading; lavish with orchestral detail and, when it comes, a spellbinding ‘Lied der Lulu’.

The most versatile of stage performers, she not only sings on this disc, but conducts, whimpers and mutters, whispers and shrieks...Berg’s Lulu Suite gets a romantic performance, strong on limpid, singing lines from the Ludwig Orchestra.

Purists might jib at Hannigan’s reharmonization of Gershwin, complete with note rows and Ligeti tone clusters, though her vocals are exuberant and the playing stylish. It’s Sequenza III, however, written for Berio’s muse Cathy Berberian, that is the high point. Transposed upwards it acquires both an unnerving vulnerability and a tentative optimism.

What strikes me about Hannigan’s performance [of the Sequenza] is its lucidity: the overall effect here is of a personality gradually warming into focus rather than disintegrating before our ears...Hannigan and Elliott play up the affinity between Berg’s jazz-inflected score and the big band sound-world of Girl Crazy so that the link (which could sound contrived on paper) comes across as entirely natural.

Hannigan opens this album with a reminder, in no shy terms, of what a stupidly seductive vocalist she is. She flits, warbles and giggles through Berio’s high-wire Sequenza III from 1965; she has a way of making everything just float...her fierce musicianship is never in doubt...her effortless style is bewitching.

Sequenza III comes up fresh and exhilarating...Her voice — more silver than sass — is hardly that of a music-theatre belter, but then that isn’t the point. Intelligent, invigorating, Crazy Girl Crazy is a madly compelling listen.

Ms. Hannigan can do so many things so well, and she does most of them here. She conducts and sings music from Berg’s “Lulu” and Gershwin’s “Girl Crazy” with predictable aplomb, but for me it is the sensuous and utterly uninhibited rendition of Berio’s solo “Sequenza III” that seals the deal.