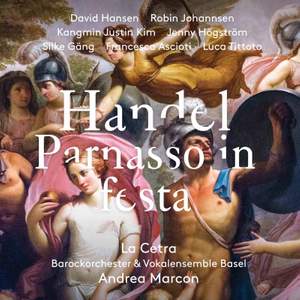 Andrea Marcon and La Cetra Barockorchester & Vokalensemble Basel sparkle in this new release of Handel's forgotten masterpiece Parnasso in testa, recorded shortly before their hugely successful Netherlands premiere of the opera in November 2016.

Handel’s sumptuous work from 1734 celebrates the marriage of Princess Anne and Prince William of Orange. It's packed with breathtaking arias, duets and choruses, all written with verve, drama and Handel’s sense of occasion. The renowned Baroque specialist Andrea Marcon gives it the attention it deserves with an outstanding vocal cast around his period-instrument group La Cetra. Opera News described Robin Johansen's performance in the Netherlands premiere as "[a] revelation ... superbly agile and fresh-sounding—but also expressive. The demanding role of Apollo is undertaken by rising star David Hansen, described by The New Yorker as "...a pure-voiced young Australian who is typical of a new breed of matinee-idol countertenors". And a performance at the Handel Festival in 2014 drew rave reviews "Altogether, with the virtuosic playing of the inspired Cetra orchestra under Maestro Marcon, so finely balanced with the stunning chorus and soloists, this concert performance of an infrequently performed serenata became ... one of the high points of the festival." (Opera con Brio)

Kangmin Justin Kim's singing of Orfeo, delivered with passion and sensitivity. [Robin Johannsen] Hers is a lovely bright soprano, full of character, a voice that comes with a high level of technical accomplishments. Finally, plaudits for the outstanding playing of La Cetra and Marcon's overall direction, which carries all before it with zest, spirit and, where appropriate, graceful elegance.