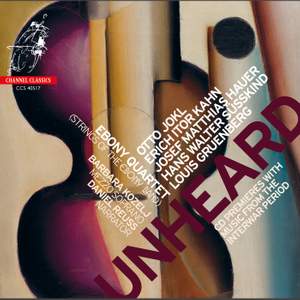 These pieces by little-known composers have travelled from interwar turbulence to the peaceful interior of an Amsterdam canalside church. The sound-world is broadly Viennese. — Sunday Times, 30th July 2017 More…

This CD is unheard, for, as far as we know, none of this music has ever been issued before. But this recording is also unheard-of, since every piece conveys an uncompromising, selfless idealism, on which the Nazis laid a curse, but which went to make the music of the Interwar period so rich and engrossing. In short, the present CD provides a supplement to the incomplete history of the music of this period, and brings unjustly forgotten composers to life once again. The Ebony Quartet consists of musicians from the Royal Concertgebouw Orchestra. For many years they have formed the string nucleus of the Ebony Band, while also performing regularly as a quartet.

Together with the Ebony Band the quartet was awarded an Edison Klassiek in 1994 for the recording of Erwin Schulhoff's Concerto for string quartet and winds. The Ebony Band was founded in 1990 by Werner Herbers, former principal oboist of the Royal Concertgebouw Orchestra. The ensemble has devoted itself to the rediscovery and rehabilitation of music from the Interwar period that was unknown, forgotten or considered lost. For many years a busy concert schedule took the Ebony Band as far as the USA, but its present mission is to document repertoire and issue hitherto unpublished works and CDs.

These pieces by little-known composers have travelled from interwar turbulence to the peaceful interior of an Amsterdam canalside church. The sound-world is broadly Viennese.

All these pieces are played with tremendous commitment and finesse by the Ebony Quartet, who transmit their belief in its enduring quality in every bar.