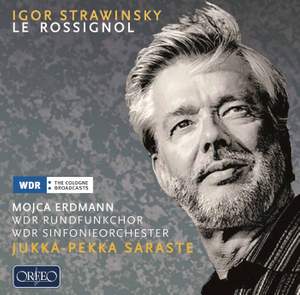 Saraste brings out a remarkable amount of detail in the score, with each line precisely etched and vividly conveyed. The playing is superb - the twittering singsong of many solo lines strikingly... — Gramophone Magazine, Awards Issue 2017 More…

Pribaoutki: No. 4, The Old Man and the Hare

Igor Stravinsky’s later stage works Mavra (1922), Oedipus Rex (1927/28) or The Rake’s Progress (1951) are more than matched by his early 'lyrical fairy tale in three acts' Le Rossignol, which occupies a special place – due to its brevity at scarcely 45 minutes. It is also unusual for the fairy-tale subject matter, based on a story called The Nightingale by Hans Christian Andersen; for its language – the original was Danish, this recording features the Russian version, yet it was premiered in French in Paris in 1914; and for its style, especially since there was a significant gap in time between the composition of the first and the other two acts, a fact that the composer was admittedly able to justify from a point of view of the shaping of the plot, since the cold atmosphere of the Chinese emperor’s royal household required a quite different musical approach to that of the beginning and end of the tale. The emperor, who is first enchanted by the bird’s song, then banishes the real thing when visiting emissaries present him with a mechanical nightingale which he names 'first singer'. When the emperor later falls ill, the nightingale returns to sing to him, and saves his life.Stravinsky’s sophisticated musical chinoiserie, which - despite the large orchestral formation - always sounds like chamber music, is in the safest of hands with the WDR Symphony Orchestra of Cologne under the baton of Jukka-Pekka Saraste. The singers too deliver a brilliant and incisive performance: above all, Mojca Erdmann, whose lyrical coloratura soprano delivers vocal embellishments, high tessitura and ability to effortlessly hit top notes up to D flat and D, thus perfectly conjuring up the almost inspired twittering of a nightingale – to lyrics, no less. The dramatic soprano Marina Prudenskaya as the Cook and alto Mayram Sokolova as Death both lend a darker tone to the story. The Fisherman from the framework plot (tenor Evgeny Akimov) is a convincing idiomatic narrator, while the baritone Vladimir Vaneev gives a fine reading of the Emperor. Six short, finely instrumented songs by Stravinsky, sung by Katrin Wundsam and Hans Christoph Begemann, including two arrangements of poems by Verlaine that exude a Debussy-like flair, complement this CD, adding a real gem to the otherwise modest discography of Le Rossignol.

Saraste brings out a remarkable amount of detail in the score, with each line precisely etched and vividly conveyed. The playing is superb - the twittering singsong of many solo lines strikingly alive - and the engineering is natural and detailed...A very fine, recommendable account of a haunting score.

Jukka Pekka Saraste draws playing of Ravel- like charm from his orchestral forces, the scores mystery and delicate orientalism. Mojca Erdmann captures the Nightingale’s ethereality as well as delivering his notes with clarity and accuracy.

The playing of the WDR Symphony Orchestra is full of character, the recording very well balanced and comprehensively informative- try the ‘Chinese March’ on track 7, which is thrillingly played.