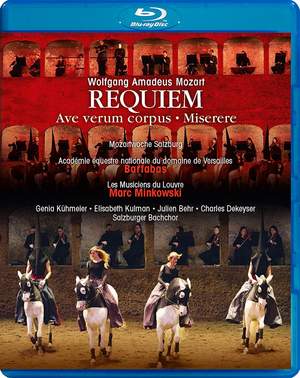 An absolute highlight of Salzburg’s Mozart Week with ‘highest art of sound and riding’ (Kronenzeitung): the French equine artist and theatrical genius Bartabas presents Wolfgang Amadeus Mozart’s Requiem. Horses and riders from the formidable Académie Équestre de Versailles join forces with the Musiciens du Louvre, conducted by Marc Minkowski, the Salzburger Bachchor and ‘an excellent quartet of soloists’ (Kurier), namely Genia Kühmeier, Elisabeth Kulman, Julien Behr and Charles Dekeyser, to place the Requiem into a new theatrical context. Restoring the Felsenreitschule’s original purpose – a riding school – and at the same time including its impressive architecture of arcades into the musical dramaturgy, the production is a breath-taking synthesis of the arts. By meticulously refining the skillfully regulated interactions between humans, animals and music, Bartabas and his horsemen have created a production which is much more than a great show riding choreography: it’s a moving exploration of the interconnectedness of existence. A piece of art with an “exceptional power of attraction” (Schwäbische Zeitung), “a requiem for all senses“ (Kronenzeitung).