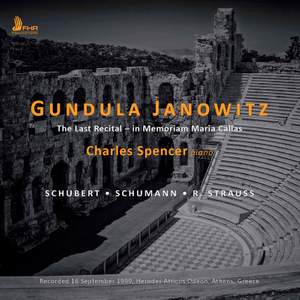 [Janowitz] is in remarkably fresh voice throughout. There’s a certain loss of bloom, inevitably, and an occasional brittleness of intonation, but the unique sound is unmistakable, the delivery... — Gramophone Magazine, September 2017 More…

Released in UK on Gundula Janowitz’s 80th birthday. 2017 is also the 40th anniversary of Maria Callas’ death. Brigitte Fassbaender said: ‘Gundula Janowitz possesses one of those voices where you have only to hear a couple of notes and you immediately know who it is. Her elegant timbre and unmistakably instrumental way of forming the phrases is unique.’ Few singers have voices that approach the purity of Janowitz’s: with its very fast vibrato and ‘white’ production, the focused sound can soar, swoop and dip with astonishing ease and control, the vocal line becoming almost liquefied into a seemingly endless melisma. Janowitz’s recorded catalogue, tends to misrepresent the focus of her career because it downplays her work as a recitalist. Of course, she did tape all of Schubert’s songs for high voice but apart from a couple of late song recitals and a disc of Hindemith’s Das Marienleben, that is all we have to remember her by as a performer of song. So this album will be a welcome addition to her discography. For her Athens recital, Janowitz chose two composers absolutely at the centre of her song repertoire, Franz Schubert and Richard Strauss, with a third, Robert Schumann, forming a bridge between the two.

[Janowitz] is in remarkably fresh voice throughout. There’s a certain loss of bloom, inevitably, and an occasional brittleness of intonation, but the unique sound is unmistakable, the delivery still clear and confident...here are songs with a certain valedictory potential that is brought out by the occasion as well as by an interpretative approach from Janowitz that is non-interventionist and leisurely.