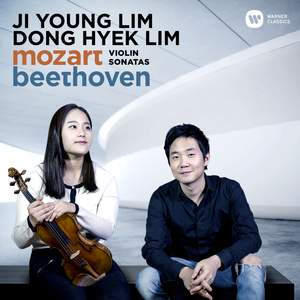 Without the slightest whiff of being ‘historically informed’, they weave a stylistically sensitive path through familiar territory, enveloping their listeners in an emotional cocoon of warmth,... — BBC Music Magazine, Christmas 2017, 4 out of 5 stars More…

Violinist Ji Young Lim quickly came to the attention of the international violin scene when she took First Prize of the 2015 Queen Elisabeth Competition in Brussels. The previous year, she was awarded First Prize in the International Violin Competition of Indianapolis, also winning the Mozart Prize.

It was at the International Violin Competition of Indianapolis in 2014 that she won the special prize for the performance of a Mozart sonata, and it is to those sonatas that she has turned for her debut recording. She is joined by her compatriot Dong Hyek Lim (no relation) who is well-established as one of the finest pianists of his generation.

She plays the 1708 Stradivarius Violin “Huggins” on loan from Nippon Music Foundation as part of the prize at the Queen Elisabeth Competition 2015.

Without the slightest whiff of being ‘historically informed’, they weave a stylistically sensitive path through familiar territory, enveloping their listeners in an emotional cocoon of warmth, charm and elegance, further enhanced by deftly balance, gently cushioned engineering.

These are hugely enjoyable performances on their own unashamedly romantic terms…the opening bars of the Andantino of K378 have a delicacy and fragrance more suited to Chopin: Mozart as Dresden figurine. And why not, when it sounds as sincere and spontaneous as this? There’s nothing contrived about this playing.

With violin playing so crisp you could dip it in sour cream and onion and hand it round at a party, this is an assured debut from Ji Young Lim. And yet even as the notes spring from her bow, one’s attention is drawn equally to her namesake pianist, Dong Hyek Lim. This is chamber music rather than a solo showcase, and the pair are uncommonly well attuned.