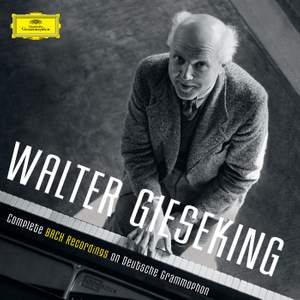 Walter Gieseking’s Bach interpretations have long been celebrated and are still praised as being modern and contemporary. His legendary 1950 broadcasts, later released on the Heliodor label, included many of Bach’s important works such as The Well-Tempered Clavier, Partitas and Inventions. For the first time, Deutsche Grammophon presents all these recordings, newly remastered, in one original jackets collection.

Includes a bonus recording of Schumann’s Piano Concerto with the Berliner Philharmoniker and Wilhelm Furtwängler (1948).