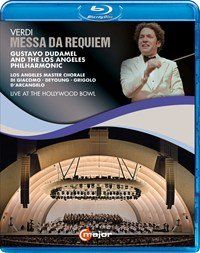 The performance is at its best in the contributions of the four soloists. US soprano Julianna Di Giacomo brings vibrant tone and plenty of personal commitment to the top line...DeYoung supplies... — BBC Music Magazine, April 2014, More… 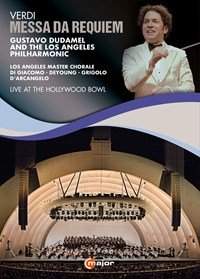 When the revered writer Alessandro Manzoni died in 1873, Verdi was unable to bring himself to attend the funeral. Instead he composed his monumental Messa da Requiem in Manzoni’s memory and conducted its first performance on the first anniversary of the writer’s death. In addition to its profound spirituality, the work also brings together all the finest qualities familiar from Verdi’s operas, qualities that include endless melodic lines and powerful musico-dramatic effects. The present performance was recorded in Los Angeles’s legendary Hollywood Bowl in August 2013 and brought together three superstars from the world of music: the conductor Gustavo Dudamel, the tenor Vittorio Grigolo and the bass-baritone Ildebrando D’Arcangelo, all of them at the top of their form. 'It was an important and exceptional evening … That experience involved a radical and wondrous rethinking of the Requiem on Dudamel‘s part' (Los Angeles Times).

Bonus - Behind the scenes + Interviews and rehearsal with Gustavo Dudamel

The performance is at its best in the contributions of the four soloists. US soprano Julianna Di Giacomo brings vibrant tone and plenty of personal commitment to the top line...DeYoung supplies consistently grand and consistently Italianate vocalism...Best of all is Ildebrando D'Arcangelo, whose firmness and authority make him a formidable exponent of the bass part.

[D’Arcangelo] is an imposing vocal presence...He gives us some excellent Verdi singing, founded on rock-solid technique, and I warmed very much to his performance...[Di Giacomo] impressed me a lot...chorally and orchestrally this is a good Verdi Requiem. The solo team offers a mixed experience and the conducting has fire and flair.

Dudamel conducting at the Hollywood Bowl might not sound the path to gravity that this work demands, but in fact that’s just what this performance delivers. Dudamel’s Los Angeles forces are superbly drilled...The four soloists are well-matched...Best of all is Juliana DiGiacomo, , whose soprano has the soaring line to dominate proceedings.