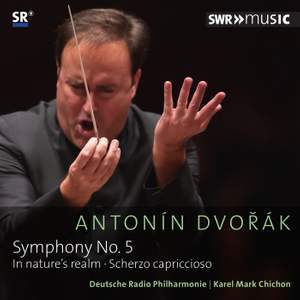 Dvorák’s Symphony No. 5 in F Major Op. 76, written in the summer of 1875, is considered to be the first work in which he found his way to a new symphonic idiom. The inflections of Bohemian folklore are still noticeable, accompanied by almost Schubertian phrases. 'A peace begins to prevail in Dvorák’s work which assuredly dominates the material from the consciousness of ability, the content of the work brightens and gains proportion, and the imperative of economical and expedient utilization takes over the means of expression.' Thus does the biographer Otokar Šourek describe this stylistic transformation. The fifth symphony is the first of the early symphonies to appear as a score during his lifetime, published by Simrock in 1887. British conductor Karel Mark Chichon continues to thrill international audiences with his temperament, passion and musicianship. Born in 1971 in London to Gibraltarian parents, Chichon studied at the Royal Academy of Music and was then the assistant to Giuseppe Sinopoli and Valery Gergiev. In recognition of his services to music, Queen Elizabeth II made Chichon an Officer of the Most Excellent Order of the British Empire (OBE) in June 2012.