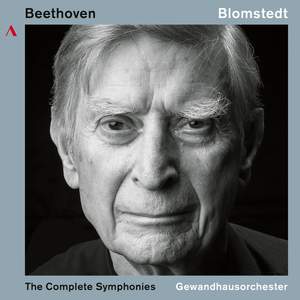 Blomstedt’s Beethoven seems ‘right’: tempi are never too fast or too slow, but never staid, and phrasing is alive with rhythmic energy and cumulative momentum. His Leipzig players give their... — Classical Music, October 2017, 5 out of 5 stars More…

Symphony No. 6 in F Major, Op. 68 "Pastoral": I. Awakening of Cheerful Feelings upon Arrival in the Country. Allegro ma non troppo

In celebration of Herbert Blomstedt’s 90th Birthday in July 2017, Accentus Music releases a new Beethoven cycle that captures the spirit of the long-standing partnership between the legendary conductor laureate and the Gewandhausorchester Leipzig. All nine symphonies, released in a box set containing five CDs, are live recordings made at the Leipzig Gewandhaus between May 2014 and March 2017.

Blomstedt's interpretations of Beethoven are based on a highly responsible handling of the scores and this conductor’s deep love of the truth, in which everything that is superimposed and overtly effective is fundamentally removed. At the same time however, the performances embrace the ethical conscience of the artist with his deep, almost seismographic musical sensibility and a high expressivity.

Blomstedt’s Beethoven seems ‘right’: tempi are never too fast or too slow, but never staid, and phrasing is alive with rhythmic energy and cumulative momentum. His Leipzig players give their all- the strings in particular have a glorious burnished gold sonority.

The playing of the Gewandhausorchester is indecently good: how refreshing to hear a full-size orchestra playing these pieces, the weight of sound thrilling in places. Blomstedt doesn't do anything radical; there's no straining for effect or tinkering with tempi or dynamics. He just plays what's written, brilliantly so.