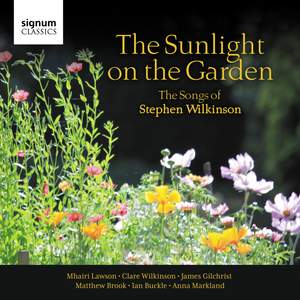 The Sunlight on the Garden: The Songs of Stephen Wilkinson

[Clare Wilkinson] compares him to Finzi, Gurney and Quilter. There are, however, elements of expressionism in his music, an emotional concentration and a sharp sense of irony that make him at... — Gramophone Magazine, October 2017 More…

Wilkinson, S: At the manger

Wilkinson, S: To a young girl

Wilkinson, S: O do not love too long

Wilkinson, S: The sunlight on the garden

Wilkinson, S: The gate in the wall

Wilkinson, S: The Owl and the Pussycat

Wilkinson, S: The Wind and the Moon

One of the UK’s leading choral directors for over 50 years, Stephen Wilkinson MBE has led both professional and amateur choirs across Europe, and is particularly renowned for his work with the BBC Northern Singers and the William Byrd Singers of Manchester.

Only retiring from conducting in 2009 at the age of 90, Stephen Wilkinson’s songs span the breadth of his long career as a conductor and musician, and are best described by his daughter Clare – an acclaimed mezzo-soprano herself who also performs on this recording – as being “a unique voice, yet deeply rooted in the English song tradition of Finzi, Gurney and Quilter.”

Performed by British singers Mhairi Lawson, Clare Wilkinson, James Gilchrist and Matthew Brook, they draw on texts by a wealth of sources including Auden, Yates, Coleridge, Shakespeare and many more.

[Clare Wilkinson] compares him to Finzi, Gurney and Quilter. There are, however, elements of expressionism in his music, an emotional concentration and a sharp sense of irony that make him at times strikingly original…the songs are persuasively done…Best of all, perhaps, is James Gilchrist, whose wonderful way with words enables him to encompass the bitter humour of ‘Chapels’, the sweetness of ‘Grantchester’ and the dark lyricism of ‘The Sunlight on the Garden’.

As can be heard on this disc, the English song tradition continues to bear fruit; singing, pianism and recording sound are here productively allied

You could certainly call it old fashioned, but that would be to miss the point: Wilkinson sets poetry to music lucidly and succinctly, and he is never sentimental. His daughter’s mellow, direct voice is the ideal vehicle for his expressive, confiding vocal lines, as is James Gilchrist’s clear, airy tenor.

Drawing on texts from the likes of Auden, Yates, Coleridge and Shakespeare, this is a must for devotees.