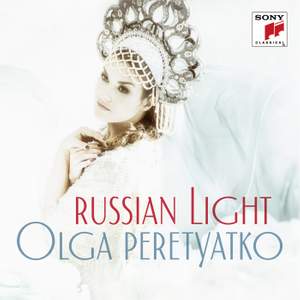 On her new album “Russian Light”, Olga Peretyatko presents favourite arias and songs from her homeland Russia – by Glinka, Rimsky-Korsakov, Rachmaninov, Stravinsky and Shostakovich. Many of them are well known (Rachmaninov’s Vocalise) but there are also unknown rare jewels on the album like the songs from Rachmaninov or the opera arias by Shostakovich. She teamed with the Ural Philharmonic Orchestra, one of the best orchestras in Russia, and excellent for this kind of repertoire with conductor Dimitry Liss, specialist for this repertoire.

The main focus of “Russian Light” falls on excerpts from operas that have left a deep imprint on Russia’s national music. Among these are Glinka’s Ruslan and Ludmila as well as Rimsky-Korsakov’s The Golden Cockerel, The Snow Maiden and The Tsar’s Bride. The latter piece represents a personal triumph for Ms Peretyatko, for she sang the role of Marfa under Daniel Barenboim to open the 2013 season at the Berlin State Opera. With her silvery timbre and solid mastery of coloratura she thrilled not only the audience but the critic of Der Tagespiegel: “Olga Peretyatko projects Marfa as a being so delicate and other-worldly that it strikes the knowledgeable listener to the core.”

Other excerpts on “Russian Light” are taken from operas by Stravinsky and Shostakovich that likewise accompanied Ms Peretyatko on her rise to stardom. In 2009 she stepped in at short notice for an indisposed colleague to sing the role of Lidochka in Shostakovich’s operetta Moscow, Cheryomushki at the Opéra de Lyon. Though she had only two days’ time before the première, she won acclaim for her breathtaking character depiction. In 2010 she sang The Nightingale in Stravinsky’s like-named opera (Le Rossignol) at the festival in Aix-en-Provence. When the production was mounted in New York and Canada the North American critics went wild about her effortless presentation and the “fresh sound of her voice”.

The Rachmaninov songs suit that lower register particularly well; the famous Vocalise is luxuriantly attractive, and Don’t Sing, My Beauty sensuously nostalgic…she closes with two songs from Shostakovich’s determinedly chirpy musical Moscow Cheryomushki…Peretyatko brings out their faux-naif charm, to round off a very enjoyable programme

[Peretyatko] her sense of spontaneity and personality are genuinely attractive. She is impressively accurate… the orchestral playing is excellent throughout.

The Russian coloratura soprano’s sound falls so easily on the ear but never tends to blandness: the Act One cavatina from Ruslan and Lyudmila showcases her dazzling agility, whilst the Lullaby from Sadko reveals warm mezzo-ish tints in the middle voice.