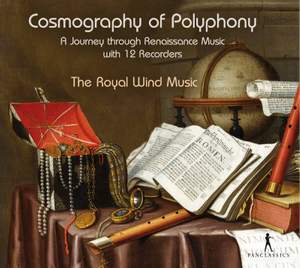 A Cosmography of Polyphony

A journey through Renaissance Music with 12 recorders

recorders are a delight when placed in such highly proficient hands as this endearing disc by The Royal Wind Music — The Scotsman, July 2017, 3 out of 5 stars More…

Pavans, Galliards, Almains & Other Short Aeirs (Arr. M.M. Ayerza for Recorder Ensemble): No. 64, Galliard "As It Fell on a Holie Eve"

The Royal Wind Music is a unique consort of renaissance recorders which performs on a collection of instruments especially made for the ensemble by leading flute makers from The Netherlands, Canada and Germany. The recorders range from the 12-inch sopranino to the sub-contrabass measuring over ten feet. Because of its special sound plenty of reviews and concert-goers have described The Royal Wind Music as a 'walking' or a 'breathing' organ. The twelve members of the ensemble all studied at the Amsterdam Conservatoire. The new CD 'Cosmography of Polyphony' sketches the musical universe of The Royal Wind Music. Since its foundation in 1997, the ensemble has performed Renaissance music from all over Europe, particularly from England, Spain, Germany, Italy, the Netherlands and Flanders, with occasional excursions into the Baroque. In the center of the ensemble’s musical universe is polyphony, the style of simultaneously combining a number of parts, each forming an individual melody and harmonising with each other.

María Martínez Ayerza’s 19 arrangements often bring the sound world of the organ to mind, and also include a generous helping of the ghostly cooing which the softly-articulated lower instruments can provide. Through pieces that are plaintive, mournful, rich, spare, sober and deliciously frivolous, this collection also constitutes a valuable cosmography recorder playing