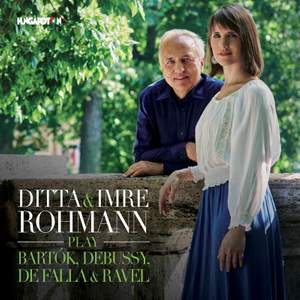 The excellent cellist Ditta Rohmann plays cello arrangements of the exquisitely selected repertory from the early twentieth century in the company of her father, the pianist Imre Rohmann. Starting with core pieces of the cello literature through works which are challenging even for violinists, to all-time favorites we are offered a snapshot of the musical world of the last century with its varied but still coherent style. We can see both the performing and the creative qualities of the artists, since we can hear their own arrangements in the recording. As a special feature, Ditta Rohamnn plays the Ravel sonata on a five-string cello. Ditta Rohmann considers artistic independence extremely important, so at present she is not a member of any ensemble or institution. She gives recitals as a soloist and a performer of chamber music and teaches on masterclasses and professional trainings. Her musical activity is defined by her individual perspective and creative attitude. This is well illustrated in her repertoire which ranges from Bach through Bartok to Indian music and improvisation. Her most important teachers were Miklos Perenyi, Ivan Monighetti, Suren Bagratuni and Ferenc Rados. Ditta’s knowledge was significantly enriched by participating in international masterclasses. Outstanding among her prizes are the ones she gained in the Leipzig Bach Competition and the Hungarian Junior Prima Prize. Her recordings of the Bach cello suites have achieved international success.