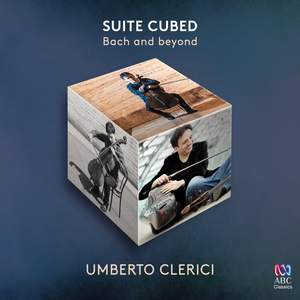 Suite Cubed -Bach and Beyond

In his debut album for ABC Classics, Italian-born cello virtuoso Umberto Clerici brings together a rich history of music for solo cello – from the Italian baroque to Bach’s Suites, and onwards to contemporary masterpieces – to re-discover the rich combination of traditions, eras and sounds that characterise Bach’s works.

Clerici’s two ‘Suites Cubed’ keep the structure of Bach’s original Suites: a series of dances, introduced by a free-form Prelude. Bach’s music forms the backbone of these new Suites, with some of the dances represented by other compositions, creating a musical world of both diversity and synthesis.

The first Suite Cubed begins with the euphoric Prelude from Bach’s Sixth Suite, before returning to the earliest surviving work for solo cello, written in 1687 by Italian composer Giovanni Battista degli Antonii. Elsewhere Giovanni Sollima’s atmospheric Alone – a true masterwork of the contemporary repertoire – leads to the folk-inspired dances of Spaniard Gaspar Cassadó; and the courtly Langsam of Paul Hindemith gives way to Bach’s elegant Bourrées.

The result is a revelatory experience: a journey through a kaleidoscope of musical colours, highlighting the range of Bach’s own music and celebrating the rich diversity of music for solo cello through the ages, brought together by Clerici’s superlative musicianship

Umberto Clerici is principal cellist of the Sydney Symphony Orchestra, and renowned as one of the most innovative musicians and educators of his generation. On this album he plays a 1722 Matteo Goffriller from Venice.