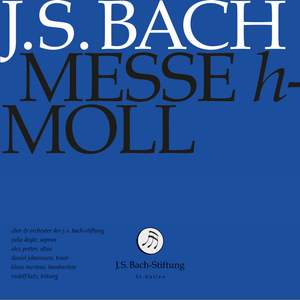 No. 4, Gloria in excelsis Deo

No. 19, Et in Spiritum Sanctum Dominum

Described in 1818 by its first publisher from Zurich, Hans-Georg Nägeli, as "the biggest" musical work of art of all times, the h-Moll mass belongs today to teh best known works of the classical legacy. This mass has permeated the new age perception of Johann Sebastian Bach as an exceptional artist with an universal orientation. After the Matthäuspassion in 2014 and the release of over 100 cantatas, the Swiss label comes forward with its second big work of Bach. "Under the distinguished experts in the historical performance practices of today, who reign from Herreweghe until Koopman, there is a far reaching common sense about the 'right' style of interpretation of the h-Moll mass: quick tempi, fluent articulations, enhancement of the wind instruments, savoring of the specific sound nature of the old instruments. Rudolf Lutz wrote all of that onto his banner. Furthermore, this dense live presentation was joined by such enthusiasm, which overcame the performers and finally the audience as well." (Neue Zürcher Zeitung) The Choir and Orchestra of the J.S. Bach Foundation is under the leadership of Rudolf Lutz.