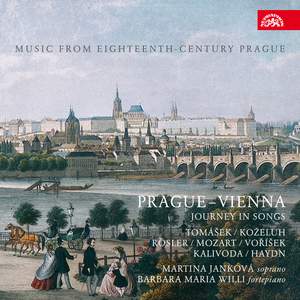 The road between Vienna and Prague, taken in 1787 by the 31- year-old Mozart so as to attend the premiere of his opera Don Giovanni, was familiar to a number of other musicians. It was a journey they made in both directions, often with the vision of attaining a better life at the other end.

The Czech songs dating from the turn of the 18th and 19th centuries, which form the axis of the present album, may be a revelation for many a listener – as may be the fact that Czech

composers mainly set to music German and Italian texts. Leopold Koželuch was one of Vienna’s most successful song composers, and, owing to, among other things, his diplomatic skills, he even eclipsed the bright star of Mozart. The Prague-based composer F. A. Rösler, whose songs are often indistinguishable from those of Mozart’s, did his utmost to preserve Mozart’s legacy following his death. And similarly to Rösler, V. J. Tomášek, who too remained faithful to Prague, possessed a refined literary taste, as duly reflected in his selection of the texts for his songs.

The recording captures Martina Janková’s engrossing voice, replete with vitality, innocence, vigour and lightness, which so becomes the Mozart repertoire. Under the hands of Barbara Maria Willi, the bright and colourful sound of the one and only preserved fortepiano built by F. J. Baumeister (1797) will be for many yet another surprise and discovery on this musical odyssey.