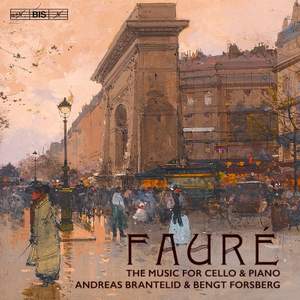 Brantelid’s light, bright, satiny tone suits Fauré’s style down to the ground – more of a high tenor than a hefty baritone – and Forsberg brings the composer’s piano writing into shimmering technicolor,... — BBC Music Magazine, September 2017, 5 out of 5 stars More…

David enjoys a charming and varied collection of works by the great French composer, performed by Andreas Brantelid and Bengt Forsberg.

In French music, Gabriel Fauré (1845 – 1924) forms a link between Romanticism and modernism: in Paris in the year of his birth, Chopin was still composing, and by the time of his death, jazz was all the rage, while Stravinsky was championing neoclassicism. This present recording contains all of Fauré’s music for cello and piano, including the much-loved Élégie and Sicilienne – pieces that are sometimes described as ‘salon music’, with qualities that caused Debussy to dub the composer ‘the master of charms’. But interspersed with this lighter fare are also the two sonatas from Fauré’s later period when, suffering from increasing deafness, he developed a more pared-down style. Even though the sonatas came into being only a few years apart they are nevertheless quite different – appearing in 1917 Sonata No. 1 in D minor is very much a wartime work, at times almost violent and rough. The G minor Sonata is altogether more accessible, with a vivacious finale that caused the composer Vincent d’Indy to remark to the 78-year old Fauré: ‘How lucky you are to stay young like that!’ Andreas Brantelid’s previous release for BIS – a disc with music by Grieg and Percy Grainger – received critical acclaim including a Gramophone Editor’s Choice. For this all-Fauré programme he has chosen to collaborate with pianist and highly respected chamber musician Bengt Forsberg.

Brantelid’s light, bright, satiny tone suits Fauré’s style down to the ground – more of a high tenor than a hefty baritone – and Forsberg brings the composer’s piano writing into shimmering technicolor, splendidly capturing its wealth of detail and constantly shifting, side-lit harmonic language

Brantelid demonstrates his beautiful singing tone throughout this disc, and an excellent recorded balance between cello and piano means you hear all the detail at all times. The performers clearly have a great rapport as phrasing and character are always well matched.

In the Second Sonata, a light touch and sense of fantasy make for an unusually successful rendition of the elusive finale. The recorded sound is bright and immediate.