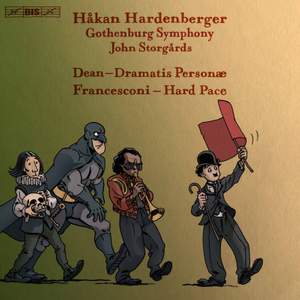 Most bewitching is the soulfulness of Hardenberger’s response as Francesconi pays poetic tribute to that real-life hero of the trumpet and more, Miles Davis. — BBC Music Magazine, November 2017, 5 out of 5 stars More…

I. Fall of a Superhero

Ever since his very first disc, released by BIS some thirty years ago, Hakan Hardenberger has earned recognition for his performances of the classical repertory, but also as a pioneer of significant and vituosic new music for the trumpet. Collaborations with composers such as Takemitsu, Part, Henze, and H.K. Gruber have resulted in numerous works, of which the two recorded here are among the more recent. Brett Dean's concerto Dramatis personae is named after the term used for the list of characters in a stage work, and casts the soloist in the role of the ''Hero''. Dean's protagonist is a complex one, however, with traits inspired by comic book super heros as well as the classical flawed heros of literature and legend: ''Soliloquy'', the second movement, is a reference to Hamlet, while Charlie Chaplin's character in Modern Times has inspired the work's finale, ''The Accidental Revolutionary''. If there is a hero in the concerto by Luca Francesconi, it is Miles Davis. In his comment sto the work, Francesconi talks of Davis as ''a musician who transcends all labels'' with ''a delicate, cracked sound'' and a voice which speaks directly to the listener. Hard Pace, the title of Francesconi's work, is an allusion to a difficult journey, but it is also a conflation of the names of the performers for whom it was written: Hardenberger, Antonio Pappano and the Santa Cecilia Orchestra. On the present recording it is the Gothenburg Symphony and conductor John Storgards who provide Hakan Hardenberger with expert support in these demanding and rewarding scores.

Most bewitching is the soulfulness of Hardenberger’s response as Francesconi pays poetic tribute to that real-life hero of the trumpet and more, Miles Davis.

Not only is Dean’s piece as theatrical as its title would suggest, it also has a compelling downwards trajectory...Luca Francesconi’s concerto Hard Pace couldn’t be more different but is just as special, perhaps even more so...With Storgårds and the GSO, it’s a dream team

It’s virtuosic writing all round, vertiginously so for Hardenberger; the abiding impression granular, craggy and imposing. Superb support from John Storgårds’s Gothenburg forces in a bold, biting recording.