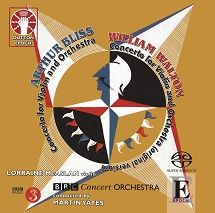 McAslan’s response to the solo part’s Heifetz-satisfying technical demands is as fine as her bombproof tuning and warm, not over-sumptuous tone and expression. — BBC Music Magazine, February 2018, 3 out of 5 stars

The Walton and the Bliss Violin Concertos make a compelling programme, given added interest here by the revival of the original version of the Walton Concerto, unheard since the early 1940s. After the earliest performances, Walton rescored it without altering the solo part, and in this superb new recording featuring the eloquent violin of Lorraine McAslan, we can fully appreciate the composer’s first thoughts, which perhaps are more a reflection of the pre-Second World War musical world. The Bliss Concerto remains the most impressive British violin concerto not in the day-to-day repertoire, and Lorraine McAslan not only underlines its lyrical qualities but also plays the complete version, reinstating the minor cuts that are sometimes made.

McAslan’s response to the solo part’s Heifetz-satisfying technical demands is as fine as her bombproof tuning and warm, not over-sumptuous tone and expression.