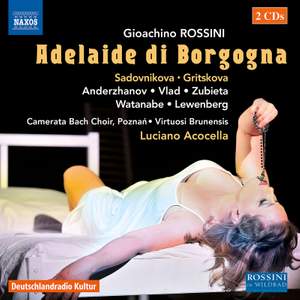 Gritskova's Ottone [is] in the lead as far as agility and determination are concerned. Baurzhan Anderzhanov's Berengario offers a firm bass-baritone, while as the villain's slightly more likable... — BBC Music Magazine, August 2017, More…

Set in medieval Italy, Rossini’s rarely performed Adelaide di Borgogna is based on dramatic historical events that led to Otto the Great (Ottone) of Germany conquering the Kingdom of Italy. Despite its political and warlike subject, Adelaide di Borgogna is full of beautiful music, Rossini using lyrical moments to emphasize emotions and express the triable of passionate love and rivalry between Adelaide, Ottone and Adelberto. Adelaide is bel canto in its purest form and was held in high regard by its composer, who recycled music of it in his subsequent operas. This performance was recorded live at the Trinkhalle, Bad Wildbad, Germany, in July of 2014 for the XXVI Rossini In Wildbad Festival (Artistic Director: Jochen Schoenleber).

Gritskova's Ottone [is] in the lead as far as agility and determination are concerned. Baurzhan Anderzhanov's Berengario offers a firm bass-baritone, while as the villain's slightly more likable son, Adalberto, Gheorghe Vlad works hard and to some effect.

Choral and orchestral forces excellent and conductor Luciano Acocella has good feeling for Rossini’s idiom. The detailed synopsis with cue-points is more than enough to follow the proceedings, and those with no interest in the drama can just indulge in the singing, which is first class.

The main attraction of this new recording lies in the two leading singers, both of them Russian, but boasting good italian diction and persuasive bel canto techniques: their voices blend seductively in the duets and rise to the challenges of the lengthy final arias with impressive ease.