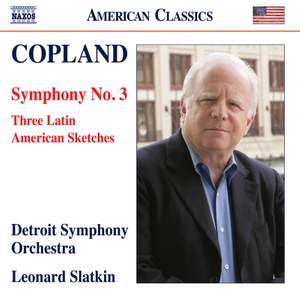 What counts…in this crisp and sensible performance is Slatkin’s concern with the Symphony’s gentler corners…[His] tight control of textures and the finesse of his Detroit musicians also help... — BBC Music Magazine, August 2017, 4 out of 5 stars More…

Symphony No. 3: I. Molto moderato (With Simple Expression)

Premiered in 1946, a year after the end of World War II, Copland’s iconic Third Symphony was described by the composer as ‘a wartime piece- or, more accurately, an end-of-war piece- intended to reflect the euphoric spirit of the country at the time.’ The fourth movement, heard on this recording in its original uncut form, opens by quoting one of his most well-known pieces, Fanfare for the Common Man. Copland described the Three Latin American Sketches ‘as being just what the title says. The tunes, the rhythms and the temperament of the pieces are folksy, while the orchestration is bright and snappy and the music sizzles along.’ The Detroit Symphony Orchestra is known for trailblazing performances, visionary conductors, collaborations with the world’s foremost musical artists, and an ardent commitment to Detroit. As a community-supported orchestra, the continued success and growth of the institution is driven by generous giving by individuals and institutions at all levels. Esteemed conductor Leonard Slatkin became the DSO’s twelfth Music Director, endowed by the Kresge Foundation, in 2008. With growing attendance and unwavering philanthropic support from the Detroit community, the DSO’s performances include Classical, Pops, Jazz, Young People’s, and Neighborhood concerts, and collaborations with high-profile artists from Steven Spielberg to Kid Rock.

What counts…in this crisp and sensible performance is Slatkin’s concern with the Symphony’s gentler corners…[His] tight control of textures and the finesse of his Detroit musicians also help illuminate the niceties of a work more complex and quicksilver In technique than its monumental poses suggest…Propelled along with the orchestra’s chiselled panache and rhythmic snap, Slatkin’s account [of the Three Latin-American Sketches] is absolutely delicious.

The orchestra’s playing is so shapely, so warmly consolatory, it’s difficult not to be won over…Slatkin’s attention to colouristic detail, and the expressive intensity of the Detroit Symphony’s playing, are riveting

Slatkin and the Detroiters clearly have the measure of the music and Naxos has provided them with a vibrant recording. Those collecting the Copland volumes in the Naxos American Classics series, of which this is the third, should not hesitate to add this volume.

Throughout, Slatkin underlines tonal lustre and clearly woven textures in a committed and characterful, simultaneously dramatic and poetic performance.