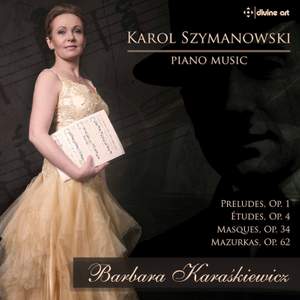 This disc would make an ideal start for anyone coming anew to this fascinating composer. — MusicWeb International, August 2017

To many, Szymanowski was the most important composer from Poland - taking the Romantic tradition of Chopin, and transforming it into style which retained the Romantic ideals but firmly within the 20th century, approaching modernism with music of enormous vitality and requiring virtuoso performance. This selection of works from the beginning, middle and en dof his output is indeed played superbly by Barbara Karaskiewicz, whose Polishness can only enhance her deep understanding of and application to this music. Included are the nine preludes, Op. 1 and the four etudes, Op. 4, rooted in the Romantic tradition; Masques from the middle period, picturesque music-portraits; and the two late Mazurkas, Op. 62. This album follows the critically acclaimed disc of works by another Polish post-Romantic, the lesser known but equally skilled Roman Statkowski.

This disc would make an ideal start for anyone coming anew to this fascinating composer.