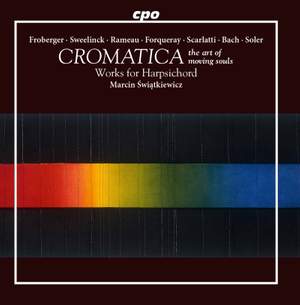 Cromatica: The Art Of Moving Souls

anon.: Toccata in A Minor (attrib. to B. Marcello)

Toccata in A Minor

Forqueray, A: Harpsichord Suite No. 4 in G Minor

Marcin Swiatkiewicz, one of today’s leading harpsichordists, invites us to join him in the multifaceted and wondrous world of chromaticism on his latest release. He performs repertoire from the seventeenth century on an Italian harpsichord by Detmar Hungerberg with fourteen keys per octave (split upper keys for d sharp and e flat and for g sharp and a flat) and in mean-tone temperament. The repertoire from the eighteenth century is heard on a two-manual copy after Johannes Ruckers by Christian Fuchs. The chromatic style is a special musical phenomenon. Already highly valued by the Greeks during antiquity, it was discovered for the modern world by Humanist scholars of antiquity during the Italian renaissance. Composers and theorists of the sixteenth century infused it with the spirit of the music of their epoch. Chromaticism flourished on the fertile ground of rhetorical polyphony of the seconda prattica at the same time and in the same place that generated the recitative, the opera, and a new homophony. With the repertoire selected for this album Swiatkiewicz intends to illustrate the phenomenon of chromatic music in the greatest possible number of geographical and historical contexts. For example, John Bull’s Chromatic Pavan & Galliard shows itself from this side: daring modulations lead into keys situated in the dark region of the circle of fifths. Toward the end of the galliard even the key of e sharp makes its appearance. It is often used as an argument for an equal temperament or at least not a mean-tone temperament but an enharmonic tuning system in Bull’s music. For their part, the Toccata by Froberger and the Capriccio cromatico by Merula take us to the heart of chromatic aesthetic experiments. The toccata is an outstanding example of the stylus phantasticus, of instrumental music with a rhetorical character drawing on the music drama and the recitative and combining counterpoint of the finest artistry with instrumental virtuosity.