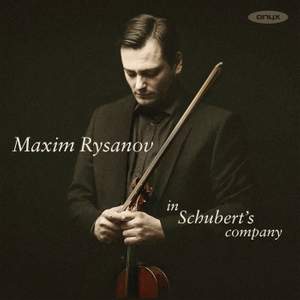 Rysanov illuminates [the Arpeggione] with warmth and grace…The Third Sonata benefits, again, from [his] buoyant lyricism and the rich timbre of his Guadagnini, glowing like ruby embers against... — BBC Music Magazine, January 2018, More…

‘I am not superstitious. Especially numerology which never occurred to me as something attractive, or something that had ever play a role in my life or had freakish power over something. Nevertheless, when I started collecting repertoire for this album, which is dedicated to Schubert's 220th anniversary, some works on the disc accidentally appeared to be connected. Schubert's 5th symphony was recorded in Riga just about 200 years after it was composed. Franz was 20 years old when he wrote it.

Leonid Desyatnikov's "Wie der alte Leiermann", for violin and orchestra, which I decided to arrange for the viola especially for this project, was composed 20 years ago for Schubert's 200th anniversary.

On a more serious note, Schubert touches me deeply. Not only with his music and his sensitive soul, but also his life story is fascinating to me. Composer, elementary school teacher, poet, philosopher, pianist, singer, violinist, violist!...

With this album, I present myself as a commissioner of new music, arranger, solo performer and conductor. I would like to believe I am 0.22% closer to understanding Schubert’ writes Maxim Rysanov.

Schubert’s sunny 5th Symphony, 3rd Violin Sonata and Polonaise for violin & orchestra, are joined by three contemporary composers who each draw on Schubert’s music for their compositions. A darker, tormented Schubert from his final years is the source for their works – Winterreise, Erlkönig and the late Fantasy for violin & piano providing the inspiration. The haunting beauty of Schubert’s music continues to exert a powerful influence on performers, composers and music lovers alike.

Rysanov illuminates [the Arpeggione] with warmth and grace…The Third Sonata benefits, again, from [his] buoyant lyricism and the rich timbre of his Guadagnini, glowing like ruby embers against the piano’s dark silk.

Rysanov is a prince among viola players, and this is one of his finest albums to date

Rysanov is involved in this many-faceted double-CD homage to Schubert as viola soloist, conductor, commissioner and arranger, often nearly all at once... The title track is a wistfully rhapsodic piece by Sergey Akhunov in which a theme from Schubert’s Adagio and Rondo Concertante seems tantalisingly just out of reach.

His treatment of Erlkönig is interesting and obsessive, playing with scraps of melody: the effect is impressive, the ending quite shattering

Maxim Rysanov is joined by the Riga Sinfonietta in an album that is a testament to the way Schubert's music continues to exert an influence today on performers, composers and music lovers alike. Highly recommended

Intriguing juxtapositions, fine playing from Rysanov and the Riga Sinfonietta