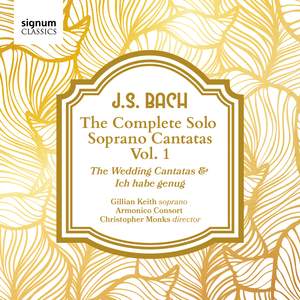 VII. Recitative - Was Luft? was Grab?

Bach’s cantatas hold a special place among performers and devotees of his music. Whether sacred or secular, these works provide incredible variety: some containing elements of narrative similar to the arias and recitatives from his great Passions; many have instrumental movements and solo passages that rival any of his concerti, and are indeed borrowed directly from some of the most famous. Not surprisingly, Bach’s cantatas are often incredibly virtuosic, demanding much technical ease and style.

Originally from Toronto, now living in London UK, Gillian Keith has emerged as one of the leading lyric sopranos of the 21st century. Her superb voice and musicianship are at home on the opera stage, concert platform and she was a regular contributor to John Eliot Gardiner's Bach Pilgrimage and Cantatas series. She studied at the Royal Academy of Music, with Barbara Bonney and Ian Partridge, and is a past winner of both the prestigious Kathleen Ferrier Award [2000] and the ROSL Singing Prizes.

This mini-series…displays both Bach’s special affinity to this attractive subgenre of cantata and Gillian Keith’s profoundly incisive and intelligent singing. Underpinning these telling vocal excursions is an unaffected simplicity of utterance in the accompanying role of the Armonico Consort…[O holder Tag] could be made for Keith as she traverses the filigree with seasoned panache and always gloriously instinctive textual nuancing

Featuring the popular Wedding Cantatas and Ich habe genug, this album is an auspicious start.