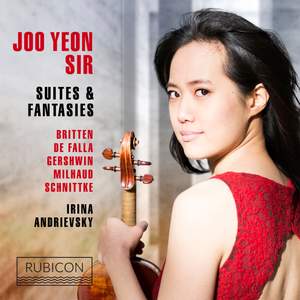 This first disc by the young British Korean Joo Yeon Sir is impressive, showcasing a firm-toned, agile and fearless playing style by a violinst who is willing to take risks on unfamiliar works,... — BBC Music Magazine, August 2017, 3 out of 5 stars More…

Frolov: Concert Fantasy on Themes from Porgy and Bess, Op. 19

David talks to the South Korean violinist about her debut disc of Britten, Milhaud, Schnittke and more on Rubicon Classics.

Korean-born British violinist Joo Yeon Sir is a name to watch. Also a composer, Joo Yeon won the coveted title of BBC/Guardian Young Composer of the Year in 2005 and her works have been performed at major venues and broadcast on BBC Radio 3. She has received a Royal Philharmonic Society Emily Anderson Award, and been selected for Making Music’s Philip & Dorothy Green Award for Young Concert Artists and a Tillett Trust Young Concert Artist Platform.

Following studies at the Purcell School and at the Royal College of Music where she twice won the Concerto Competition, Joo Yeon was also Constant & Kit Lambert Junior Fellow 2014-2015 (awarded by The Worshipful Company of Musicians), presenting a sold-out concert series of the complete Beethoven’s 10 Sonatas for Violin and Piano cycle with 10 different pianists at RCM.

Future highlights include debut appearances at the Royal Festival Hall and Wales Millennium Centre and a Young Artist Residency at St. John’s Smith Square.The Strad magazine reviewing a Wigmore Hall concert commented: "Exuberant…feline and seductive, rattling off the fiendish cadenza with bravura and oodles of personality". That personality comes to the fore in this eclectic and emotionally wide-ranging recital of suites and fantasies by a group of composers you won’t often find together on a concert programme. Britten’s youthfully precocious Suite Op 6, Milhaud’s suave ‘Le Boeuf sur la toit’ and Frolov’s effervescent fantasy on themes from Gershwin’s ‘Porgy & Bess’ rub shoulders with Schnittke’s affectionate hark back to the baroque and de Falla’s passionate 'Popular Spanish Songs'. She plays on a Matteo Goffriller violin kindly provided by Georg von Opel. This recording was produced by Andrew Keener.

This first disc by the young British Korean Joo Yeon Sir is impressive, showcasing a firm-toned, agile and fearless playing style by a violinst who is willing to take risks on unfamiliar works, and who has a clear rapport with her pianist.

Joo Yeon Sir has a light, delicate tone, which suits Alfred Schnittke’s Suite in the Old Style with its Stravinskian neoclassical politeness. She turns phrases elegantly, ably supported by Irina Andrievsky’s stylish piano accompaniments. Michael Kennedy viewed Britten’s Suite for violin and piano as the last of his ‘prentice instrumental works’. It charts a course between charm and abrasiveness and is given a committed reading here

The robust central core of the recital is Britten’s Suite for violin and piano. Sir’s performance points up the work’s dry, alert qualities and she also creates an air of hushed mystery in the central Moto perpetuo. Sir ends on a high with Le boeuf sur le toit, replete with Latin American flavour and an often breathtaking command of Honegger’s wild candenza.