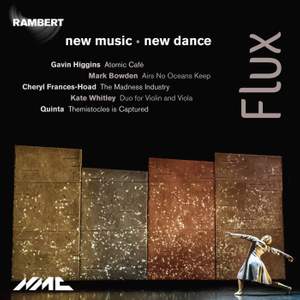 This is a diverse and highly engaging collection of works and, as Rambert’s musical director suggests, listeners should feel welcome to dance in response — BBC Music Magazine, September 2017, 4 out of 5 stars More…

Whitley: Duo for Violin and Viola

Themistocles Is Captured: I. A Ship for Asia Minor

Themistocles Is Captured: II. I Have with Me Two Gods

Themistocles Is Captured: III. The Likely and the Rich

Paul Hoskins, Rambert Music Director, writes ... 'When I thought up the idea of a Rambert Music Fellowship in 2009, I had nothing more than a hunch that Rambert could be an interesting and inspiring place for a composer to be for a year. Since then, the five composers featured on this album have helped to make the fellowship what it is today: a scheme widely admired for the way it supports new music and new dance, and facilitates connections between artists in different fields. Composers, choreographers, dancers and musicians all benefit from being given time and support to develop their practice and to mature. As organisations we can similarly improve our ability to commission work effectively, if we have the confidence to be patient, develop long-term relationships, and work alongside composers throughout their careers.' This album showcases five works by past Rambert Fellows. Gavin Higgins' Atomic Cafe performed by the Rambert Orchestra explores the horror of nuclear Armageddon and is inspired by an 1982 public information film which gave practical, yet in all likelihood quite useless, advice on surviving a nuclear attack. The starting point for Mark Bowden's piano trio Airs No Oceans Keep was Emily Dickinson’s poem ‘I Think that the Root of the Wind is Water’. Exploring the theme of oceanic weather, the piece blends airy sounds, melodic flurries and sudden crashes. Cheryl Frances-Hoad's The Madness Industry for brass quintet was inspired by Jon Ronson’s best-selling book The Psychopath Test. She mimics psychopathic characteristics with frequent changes of time signature, violent outbursts, and a relentless pace. Quinta (stage name of composer Katherine Mann) is a frequent collaborator with Radiohead's Philip Selway. Her otherworldly piece Themistocles is Captured is in three short movements and is performed by the composer on violin, electronics and a Magnetic Resonator Piano (an acoustic piano with a series of electro-magnets set along its strings). Also on this album, fresh from her debut full-length album on NMC, is Kate Whitley's Duo for Violin and Viola, written for a choreography inspired by a sculpture called 'Wrestlers' by Henri Gaudier Brzeska.

This is a diverse and highly engaging collection of works and, as Rambert’s musical director suggests, listeners should feel welcome to dance in response

the most original and distinctive voice is heard on Quinta's Themistocles is Captured, whose post-minimal soundscape is held in flux by delicately pulsing rhythms on magnetic resonator piano and electronically manipulated violin. Another NMC treat.

This disc showcases five dance works by recent [Rambert] fellows...I bet the one you will most want to see danced is Cheryl Frances-Hoad’s The Madness Industry, a succinct piece played by Onyx Brass with perfectly balanced wit and melancholy.