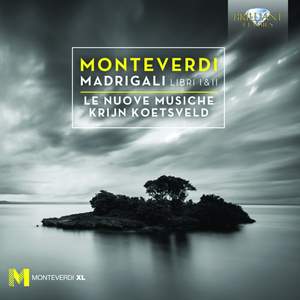 Le Nuove Musiche, led by acclaimed director Krijn Koetsveld, continue with their exceptional series of Claudio Monteverdi’s complete madrigals. Here, they look back to the very beginning of Monteverdi's works, when the young composer was still under the influence of his teacher Marc'Antonio Ingegneri. At this time, the madrigal was already a popular art form, one that Monteverdi was beginning to add his name to, before – as we know – he would go on to radically extend it with the introduction of the seconda prattica. These two books show that Monteverdi was an assured and dexterous composer in the established genre. He could follow the conventions of madrigal-writing – concentrating on the recitation of the text, adding in affects by altering the melody, rhythm and harmony – with skill and originality. Although he had to compete with other books already on the market, he was confident and ambitious – he dedicated his books to prominent patrons, and finally gained a royal appointment in Mantua shortly after the second book of madrigals was published.

Le Nuove Musiche’s approach to Monteverdi is an innovative one: to bring the past into the present, keeping alive the questions of the Renaissance that still permeate our musical landscape today, while seeking to maintain the highest standards of performance authenticity. Their release of Books V & VI garnered excellent reviews, including five stars in the French magazine Diapason.

The first two books of Madrigals by Monteverdi date from the period in which he lived and worked in his native town Cremona. They are sublime examples of the Prima Prattica, in which Recitation of the text came first, and affects were made audible by melody, rhythm, and by playing with repetitions, strengths and harmony. In the Second Book we encounter lovely word painting and evocation of images and moods.

This is the third instalment of the complete recording of Monteverdi’s Madrigals by Le Nuove Musiche. This vocal ensemble consists of the elite of Dutch Early Music vocalists, led by eminent conductor and scholar Krijn Koetsveld. Their previous Monteverdi recordings received excellent reviews in the international press, among which a “5 star” in the French Diapason and a “10/10” in Dutch classical magazine Luister.

The booklet contains liner notes written by the conductor and the complete vocal texts and their English translation.

Recorded in The Netherlands in 2013.

Contains liner notes and a biography of the artists.

Contains the sung texts in Italian and English.