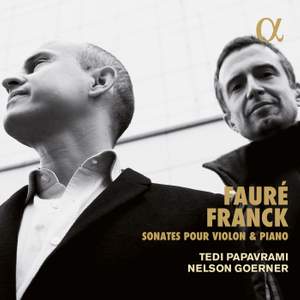 Goerner’s opening statement in Fauré’s First Sonata is passionate, free and probing, and I was expecting violinist Tedi Papavrami to follow suit, but he is a little more discreet and gentle in... — BBC Music Magazine, December 2017, 4 out of 5 stars More…

Two great interpreters, poets and lovers of the French repertory and chamber music join forces here: the violinist Tedi Papavrami and the pianist Nelson Goerner. They have chosen to devote this programme to the two violin sonatas of Gabriel Fauré and the Sonata of César Franck. Cesar Franck and Gabriel Faure were two of the main architects of the renaissance in French chamber music during the final decades of the nineteenth century. Both were members of the Societe Nationale de Musique they helped to found in 1871, along with Camille Saint-Saens, Romain Bussine, Henri Duparc, Jules Massenet and others. It was for this society that Faure wrote his first masterpiece, the Sonata for Violin and Piano in A major. Impelled by patriotism, they jointly undertook a crusade to safeguard French music, adopting the motto Ars Gallica. At the same time, in a century largely dominated by opera, they aspired to rehabilitate the neglected genres of symphonic and chamber music, and song- the typical genres of German music. They succeeded spectacularly, and the number of major works produced in France during this period is phenominal.

Goerner’s opening statement in Fauré’s First Sonata is passionate, free and probing, and I was expecting violinist Tedi Papavrami to follow suit, but he is a little more discreet and gentle in tone…One’s ears adjust after a while, and what’s then clear is that this is a performance of subtlety and confidence…There’s technical aplomb throughout.

Hear the firmness of Papavrami’s tone [in the Fauré] and sense the way that Goerner’s lines quietly pull the music forwards with increasing momentum and weight. It feels like a symphonic prelude; and sure enough, when the second movement finally breaks, it’s positively volcanic: a headlong, keyboard-shaking, lower-string-buzzing onrush of passion. No wonder Proust felt that this music burned itself on to your soul

Pianist Nelson Goerner and violinist Tedi Papavrami clinch the muscular, urgent nature of the music as well as its sensitivity and flux; the rigour and classicism as well as the whimsy. It’s very much an equal partnership, with Goerner urging things on and Papavrami responding with generous, full-toned lyricism. The Franck sonata gets a particularly fine performance – intelligent, forthright playing from both musicians.