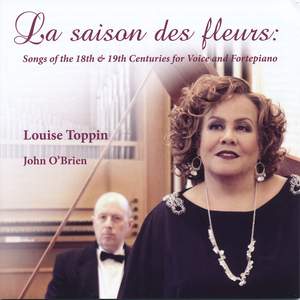 Linley the elder: Selima and Azor

Selima and Azor: No Flower that Blows

Linley the elder: The Spanish Rivals

Linley the elder: The Duenna

The Duenna, Act II: When a Tender Maid

No. 1. Zeuignung an Deutschlands Töchter

Louise Toppin has received critical acclaim for her operatic, orchestral, and oratorio performances throughout the United States, Europe, Asia, New Zealand, and the Caribbean. She has appeared in recital on many concert series including Carnegie Recital Hall, Merkin Hall, Kennedy Center, and Lincoln Center. Her discography includes 16 recordings of American music. In addition to her concert career, she serves on the faculty at the University of North Carolina, Chapel Hill. She is joined by fortepianist John O'Brien. They began their collaboration as colleagues at East Carolina University and have performed throughout the country on concert series. This recording gives listeners the opportunity to hear songs—by lesser-known and canonic composers alike—as they might have sounded with their original fortepiano accompaniment. La saison des fleurs lets us experience the many-shaded efflorescence of the art song genre anew, when poetry, voice, and piano joined together to create a higher artistic whole.