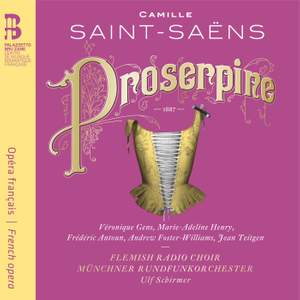 Frédéric Antoun is a bright, not exactly nuanced Sabatino and Jean Teitgen a warm and sympathetic Renzo, but the main prize goes to Véronique Gens for her utterly superb singing of the title... — BBC Music Magazine, September 2017, 4 out of 5 stars More…

The French falcon talks to Katherine about taking on the dark and dramatic title-role in the first complete recording of Saint-Saëns's drame lyrique.

The protagonist of Saint-Saëns’ Proserpine, premiered at the Opéra-Comique on 14 March 1887, is no reincarnation of the ancient goddess, but a Renaissance courtesan well versed in culpable amours. According to the composer, she is ‘a damned soul for whom true love is a forbidden fruit; as soon as she approaches it, she experiences torture’. Yet for all the innocence of her rival Angiola, the unexpected happens: ‘It is the bloodthirsty beast that is admirable; the sweet creature is no more than pretty and likeable.’ Visibly enraptured by this delight in horror, Saint-Saëns indulges in unprecedented orchestral modernity, piling on the dissonances beneath his characters’ cries of rage or despair. He concluded thus: ‘Proserpine is, of all my stage works, the most advanced in the Wagnerian system.’ The least-known, too, and one which it was high time to reveal to the public, in its second version, revised in 1899.

Frédéric Antoun is a bright, not exactly nuanced Sabatino and Jean Teitgen a warm and sympathetic Renzo, but the main prize goes to Véronique Gens for her utterly superb singing of the title role

The cast is led by Véronique Gens in the title-role, her ever-expressive colouring of text superb, from scornful and haughty courtesan to desperate lover…Frédéric Antoun is a stylish Sabatino…Andrew Foster-Williams’s biting baritone makes for a splendid Squarocca…The Munich Radio Orchestra impress, particularly in the pulsating entr'acte depicting Proserpine’s flight back to Florence.

Both Gens and the soprano Marie-Adeline Henry rise to the occasion magnificently, the latter suddenly instilling Angiola with an unexpected steely determination. The rest of the cast cannot be faulted, either. Ulf Schirmer and the Munich Radio Orchestra could hardly bring more conviction or drama to the score.

If Gens is marvellous as the tortured Proserpine, it's Henry who makes an even bigger impression as her innocent rival Angiola...Schirmer conducts with authority and panache, making the most of a fascinating score.

A pleasant surprise for all lovers of French romantic opera. Conducted by the energetic and charismatic Ulf Schirmer, the picturesque work is brilliantly performed by a first-rate cast, a colourful choir and an inspired orchestra. All the musicians absolutely share the conductor’s enthusiasm.