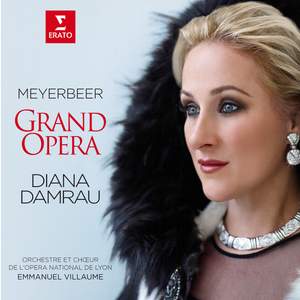 Diana Damrau tackles with pretty consistent success all the vocal difficulties Meyerbeer threw at his heroines - and some of his mature works were written for the leading singers of the day.... — BBC Music Magazine, May 2017, 4 out of 5 stars More…

Giacomo Meyerbeer, the master of Parisian grand opéra, was hugely successful in his time and a major influence on Verdi and Wagner. His music has fascinated Diana Damrau since her student days. With her brilliant coloratura, lyricism and dramatic power, the soprano rises triumphantly to the vocal and expressive challenges of arias from 10 of his operas, singing in French, Italian and German. Two of the arias receive their world premiere recording with this album. The idea of a Meyerbeer album has been close to Diana Damrau’s heart since she first recorded for Erato back in 2006. She became fascinated by the composer’s music as a student in Würzburg, when she was invited to perform his cantata Gli amori di Teolinda. “I immersed myself in Meyerbeer’s world,” she explains, “and was excited by his multifaceted writing for the voice, by his orchestral colours, his theatrical instincts, the powerful and varied way in which he expresses emotion, his splendid melodies and, last but not least, his ability to capture precisely the right ‘national style’. If you compare his Italian, German and French works, it is like listening to three different composers.”

Diana Damrau tackles with pretty consistent success all the vocal difficulties Meyerbeer threw at his heroines - and some of his mature works were written for the leading singers of the day. She's assisted by singers taking on the small interjections from secondary characters, and well supported by the fine Lyon orchestra under the skilful baton of Emmanuel Villaume.

The surprise of this disc is how much more than “grand opera” Meyerbeer actually has to offer...[Damrau] is adept at portraying a variety of characters and the Orchestre de l’Opéra national de Lyon under Emmanuel Villaume offers stylish support

We run the gamut from charming simplicity in the German works, Rossinian fireworks in the Italian ones to, well, Meyerbeerian fireworks in the French…perky coloratura, dispatched with cool aplomb by Damrau, is a standard device…there’s still plenty of originality, though…[and] the soprano’s technique remains unruffled regardless of what challenges are thrown her way…the Lyon Opera forces under Emmanuel Villaume offer fluent, lively support

A treasure-trove of rare gems by a composer who's still (to my mind) woefully under-recorded, showcasing the German soprano's pinpoint-accurate coloratura and newly-acquired vocal colours and amplitude: the long-lined cavatinas are every bit as breathtaking as the plentiful pyrotechnics.

Brava to Damrau for championing this neglected composer’s soprano ariasShe is perhaps best known for her early high-flying German roles...but dispatches Meyerbeer’s dizzying coloratura with no less aplomb, even if her tone hardens under pressure.

Damrau’s easy grace, brilliant tone and pliant expressiveness is everywhere...Meyerbeer geeks will be delighted to hear two obscure German arias, recorded for the first time. Everyone else will just be delighted.

Damrau is caught at an ideal time in her career. She still has the flexibility to attack the florid pieces with gusto, but also the heft to fill out the arching phrases of an aria such as 'Robert, toi que j'aime'...Meyerbeer is shown to be hugely inventive and skillful, apart from his oft-lumbering key-changes...Villaume conducts with elegance, helping his soprano to extract maximum effect from each aria.