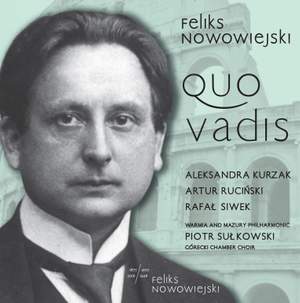 Scene 3: Wir sind bereit, für Jesu Namen (We are prepared, in the name of Jesus (Soprano)

Scene 5: Doppelfuge: Preis, Lob und Dank dir, dem Gesalbten (Praise and glory and thanks be unto you, the anointed) (Chorus)

Scene 5: Ehre e idem Vater und dem Sohn (Glory be to the Father, and to the Son) (Chorus)

During his stay in Rome in 1903, Feliks Nowowiejski, at the height of his fame after receiving the prestigious Giacomo Meyerbeer award, set out to compose an oratorio based on the novel Quo Vadis (1896) by Henryk Sienkiewicz. However, he was not the first composer who thought about a musical version of this captivating story from the times of Emperor Nero. Five years before, another Polish composer Emil Młynarski, began working on his opera Ligia, which, however, remained unfinished. Although to this day at least six – mostly Italian – opera reinterpretations of Quo Vadis have been staged, none of them came even close to the achievement of the 26-year old Nowowiejski in terms of the scale of artistic success.