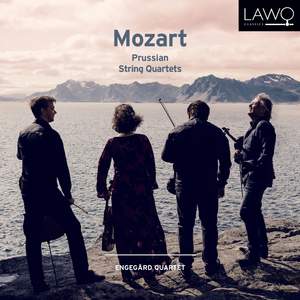 The Norwegian Engegård Quartet responds well to the warmth and melodic ardour of these pieces. These aren’t, perhaps, the most polished performances you’re ever likely to hear…but they’re likeable... — BBC Music Magazine, December 2017, 4 out of 5 stars More…

The Engegård Quartet, born under the midnight sun in Lofoten in 2006 and now one of Scandinavia’s most sought after chamber music ensembles, is very excited to launch a recording partnership with the ambitious and visionary recording label LAWO Classics.

"It is a huge honour and responsibility to record Mozart’s string quartets, but it feels right to take one of our most cherished concert programmes into the recording studio. We have been working on Mozart’s string quartets since our first notes together. Our shared love for Mozart’s music, and particularly our primarius, Arvid Engegård’s passion for Mozart reflected in his choice of repertoire both as a conductor and violinist throughout the last three decades, make recording Mozart’s string quartets a timely project indeed. On this CD we present the three final quartets Mozart ever wrote, known as the “Prussian” quartets, because of their dedication to the King of Prussia, Friedrich Wilhelm II. They are intricately constructed and give a prominent role to all voices, but particularly to the cello. If all goes according to plan, this will be the first of several CDs of Mozart’s string quartets recorded by the Engegård Quartet for LAWO Classics."

The Norwegian Engegård Quartet responds well to the warmth and melodic ardour of these pieces. These aren’t, perhaps, the most polished performances you’re ever likely to hear…but they’re likeable enough, with finely-judged expressive freedom in the slow movements, and an imaginative approach to providing subtle variation in repeats.