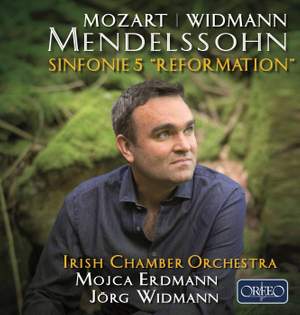 The Irish Chamber Orchestra, of which Widmann is principal guest conductor, follow their conductor’s every gesture…the breadth of dynamics is enormous, giving [the Mozart] the character of a... — FonoForum, July 2017, 5 out of 5 stars More…

The second instalment of Jörg Widmann and the Irish Chamber Orchestra’s recordings of Felix Mendelssohn’s symphonies is devoted to what is known as the Fifth, in keeping with the upcoming celebrations to mark 500 years since the Reformation. In fact, from a chronological point of view, this is Mendelssohn’s second symphony, originally conceived to mark the celebrations of 300 years since the Reformation’s Augsburg Confession of 1530. However, rehearsals descended into tumult, and the orchestra refused the former child prodigy, much to Mendelssohn’s distress. The following year the gifted composer applied, after the death of his mentor Carl Friedrich Zelter, to succeed him as Director of the Berlin Singakademie and, as part of his application, gave three concerts, one of which included the premiere of his ‘Symphony in Celebration of the Church Revolution’. The fact that his application was unsuccessful was traumatic for the young composer, and the symphony was not published until 1868, more than 20 years after his death, by his son Paul under the posthumous opus number 107.

The work is full of daring and abundantly formal characteristics, from the confrontation of the artistic, canonicallyelaborated Catholic intonation of the Psalms employing a Reformational wind chorale over the ‘Dresden Amen’ that both Wagner and Bruckner were to use, through to the superimposition of the sonata writing and chorale variation in the final movement. For Jörg Widmann it was an appealing challenge to contrast the historically fraught and consciously complex experiment by the mature prodigy Mendelssohn with the young Mozart’s highly emotional, compositionally concentrated answer to his encounter with Bach’s Fugues; the Fugue in C Minor for two pianos is expanded here by a passionate Adagio and arranged for string orchestra.

The first recording of an adaptation of Widmann’s own String Quartet No. 5 (with soprano) takes the same formation and decisively expands it with an oboe and two bassoons in his Attempt at a Fugue from 2005. This, he suggests, is his most serious piece in the tradition of Haydn and Mozart’s ‘scholarly’, ‘artificial’ fugal quartets, which reflect and deconstruct the history of this genre. Finally, the instrumentalist, conductor and composer Widmann has fulfilled a personal wish: to arrange for clarinet and piano one of his favourite pieces by the 15 year-old Mendelssohn. The Andante from the Sonata in E flat major of 1824 is performed in Widmann’s version for clarinet, string orchestra, harp and celesta, producing – according to the arranger himself – ‘miracle music’

The Irish Chamber Orchestra, of which Widmann is principal guest conductor, follow their conductor’s every gesture…the breadth of dynamics is enormous, giving [the Mozart] the character of a giant

This ingeniously scored essay calls for a soprano (in this context the excellent Mojca Erdmann), an oboist and a chamber orchestra, and leaves an extremely powerful impression. I’ve already returned to it a number of times and I’d say that you wouldn’t be misguided if you invested in this well planned programme for its sake alone.