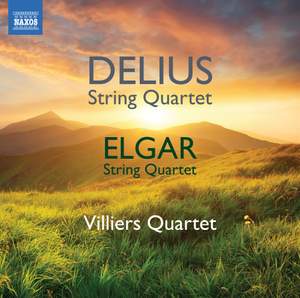 Ripely captured by the microphones, the Villiers Quartet are on dedicated form and their reading of the work as we know it today is likewise a laudable one…for Delius diehards the disc will be... — Gramophone Magazine, July 2017 More…

I. Allegro moderato, with animation

The legacy of the First World War left its mark on the music of near contemporaries Edward Elgar and Frederick Delius. The powerful outer movements of Elgar’s String Quartet in E minor frame a wistful and sombre Andante piacevole. Delius was dissatisfied with the first, three-movement version of his Quartet and revised the score. On this recording the final 1917 version is followed by the original versions of the opening movement and of the Late Swallows slow movement, offering a rare glimpse into Delius’s compositional workshop.

Ripely captured by the microphones, the Villiers Quartet are on dedicated form and their reading of the work as we know it today is likewise a laudable one…for Delius diehards the disc will be essential listening for the two extra completions alone.

The addition of the two first versions of the Delius Quartet make this uniquely valuable.

Warm, open-hearted performances from the six-year-old British string quartet, who take the considerable technical demands of the Elgar entirely in their stride and make a hugely persuasive case for the neglected Delius quartet, with sound that's as glowing and golden as the record-sleeve.

The Villiers Quartet, formed in 2011 and specialists in English music (among other things; they are an inquisitive ensemble), play the Delius with zest and passion. Their Elgar, too, is febrile and bold. Fresh playing all round, at budget price.

The Villiers balances expressive intensity with a chamber- scale introspection that draws the listener in, enhanced by a discreetly atmospheric yet detailed sound picture.