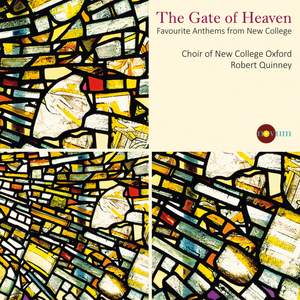 The Gate Of Heaven: Favourite Anthems from New College Oxford

Martin, M: I saw the Lord (In the Year that King Uzziah Died)

The anthem has always had a special place in the Anglican choral tradition and this new selection from the Choir of New College Oxford, directed by Robert Quinney, celebrates the richness of this repertoire with particular Oxford connections. The selection explores the rich vein of choral writing which grew out of the ‘Oxford movement’ and the re-emergence of Roman Catholic liturgy in the nineteenth century. Well-loved favourites by William Harris, such as Faire is the Heaven and Bring us O Lord God, which gives the collection its title, are set next to works by Stanford to illustrate the wider European influences at play on English music before the First World War. A more intimate response to text, based on the tradition of English song writing, is shown in anthems by Finzi and Hadley. And finally, new works by Matthew Martin and Rhian Samuel demonstrate the continuing commitment by choirs such as New College to keep reinventing and enriching the anthem and its place in English music.