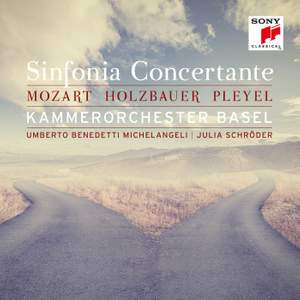 The euphonious Basel soloists blend and dovetail sensitively in all three works, and reveal plenty of individual personality. The Holzbauer is enlivened by a discreetly inventive fortepiano continuo…[and]... — Gramophone Magazine, August 2017 More…

There was hardly a music genre more popular at the height of the Classical period than the Sinfonia Concertante. An entirely new concert experience resulted from a combination of a straightforward orchestral setting and brilliant playing by soloists as well as blending elements of the symphony, solo concerto and divertimento. Composers did not score works for individual soloists only, but also created a symphonic genre with as many as nine solo instruments. Under the baton of Umberto Benedetti Michelangeli, the Kammerorchester Basel – one of the best chamber orchestras in Europe and three-time winners of the ECHO Klassik Award – has recorded three of the most interesting and varied works of this genre. The Sinfonia Concertante in F major by the Haydn pupil and Strasbourg cathedral Kapellmeister Ignaz Josef Pleyel (1757–1831) is impressive not only due to the number of solo instruments but also because of its wonderfully refined orchestral accompaniment. The Sinfonia Concertante in E-flat major by Mannheim court composer Ignaz Holzbauer (1711–1783) is recorded by a first-rate orchestra here for the first time. A further highlight is the Sinfonia Concertante in E-flat major, K 297b, by Wolfgang Amadeus Mozart (1756–1791) as reconstructed by Robert Levin.

The euphonious Basel soloists blend and dovetail sensitively in all three works, and reveal plenty of individual personality. The Holzbauer is enlivened by a discreetly inventive fortepiano continuo…[and] I also enjoyed the spontaneous-sounding touches of ornamentation, and oboist Matthias Arter’s cadenzas, with their witty Mozartian cross-references…the Basel Chamber Orchestra, recorded in a glowing church acoustic, play with their customary polish and élan.

The Kammerorchester Basel, under the direction of their concertmaster Julia Schröder, take us with audible pleasure on a voyage of discovery, and hit upon the bright and friendly tone of these two pieces perfectly