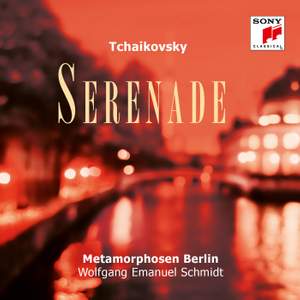 Ensemble Metamorphosen Berlin follow up on the success of their debut album with works by arguably the most well-known composer to come out of Russia; Tchaikovsky. Their debut album “Inspiration” earned 5* reviews from Cencerto Music Magazine as well as Berlin Broadcaster rbb Kulurradio. This new album includes Tchaikovsky’s “Souvenir de Florence” and his “Serenade in C Major”. Op. 48. A particular highlight of this new release are NEW ARRANGEMENTS by cellist/ director Wolfgang Emanuel Schmidt of “Valse Sentimentale” – recorded for the FIRST TIME for cello and string orchestra. The Ensemble Metamorphosen Berlin is a merger of outstanding chamber musicians and young international awardees of the International Tchaikovsky Competition in Moscow and others. Led by conductor Wolfgang Emanuel Schmidt, the Ensemble delights with solistic brilliance, emotional pleasure in playing and tonal sensitivity. Founded by the idea of transfering a Cellist strengths to a Chamber Orchestra, Wolfgang Emanuel Schmidt and his Ensemble developed their own playing culture and tonal perfection shaped by dynamics and sensuality.