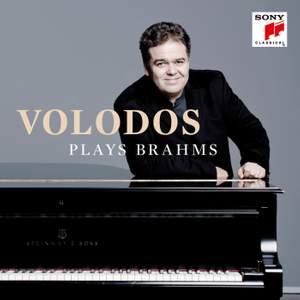 Volodos, rather like the music, can seem to inhabit a world of his own – removed, remote, yet in steely control of the expression of that remoteness…Volodos is a master of soft and silken tone... — BBC Music Magazine, November 2017, 5 out of 5 stars More…

I. Intermezzo in A Minor

II. Intermezzo in A Major

Four years after his fascinating and highly praised album with works of the Spanish composer Mompou, Arcadi Volodos went into the Berlin Teldex Studio again to deliver another reference recording, this time with the music of Johannes Brahms. Volodos has played the Brahms solo pieces over the past years in places all over the world and received highest critical acclaim for his interpretation. The Brahms solo works are perfect to show Volodos unique ability to create a special and magic sound, a sound “which lifts us, the listener, into the air and which makes us believe that the world is floating" (Frankfurter Allgemeine Zeitung). Recorded in the famous Teldex Studios Berlin in three sessions (2015 - 2017) on a great Steinway Grand Piano specially tuned by Michel Brandjes, one of the best tuners in the world. There is no editing in this recording. Volodos played every piece over and over again to develop his idea of structure and sound and chose the best version of each piece after the end of the recording.

Volodos, rather like the music, can seem to inhabit a world of his own – removed, remote, yet in steely control of the expression of that remoteness…Volodos is a master of soft and silken tone and has the steadiest of rhythms…There’s a certain sense of ‘rightness’ to the tempos and every note feels weighed in the balance. The disc’s sound quality complements these cushioned subtleties with warmth and clarity.

This is one of those discs where a word count is a strange thing. For it needs only four: Go Buy This Disc...whatever he does, you can’t imagine the music going any other way, which is perhaps the definition of a great artist....Comparisons become irrelevant in interpretations of such mesmerising honesty. An award-winner if ever I heard one.

His playing is wonderfully cultured, full of insight and beautifully precise phrasing, with typically lush tone. His rapt treatment of the Three Intermezzi Op 117, is entrancing, although some may cavil at the rather relaxed tempo for the best known of the set, the first in E-flat major (though he is in good company in this choice). The four intermezzi, ballade and romance that make up the Op 118 set are rendered in as beguiling a fashion. Sony’s sound is superb, too.

he is capable of playing of the most exquisite simplicity, spinning lines of lyrical purity.